Why did Luckin Coffee not Outrank Starbucks in China? 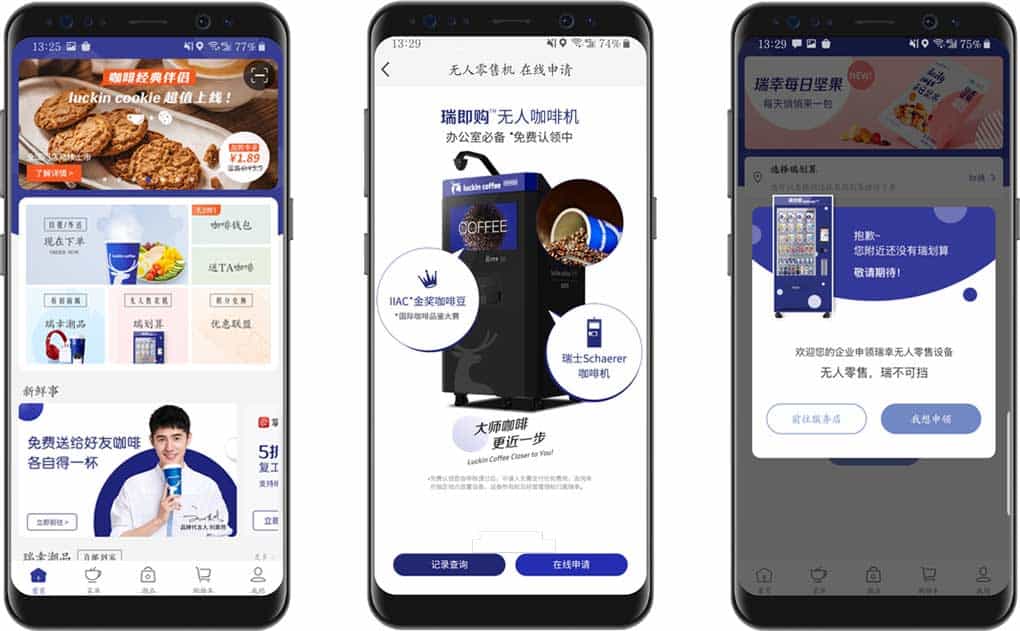 Luckin Coffee, a Chinese coffee company that is currently valued at $1.5 billion, has recently been making headlines for its rapid growth in China’s competitive coffee industry. However, despite Luckin’s recent success it did not quite manage to win over the market and outrank Starbuck as china’s most successful coffee franchise. Let’s have a look at how Luckin Coffee became so big so quickly and at how Starbucks manages to keep its title of number one coffee seller in the middle kingdom.

Luckin Coffee (瑞幸咖啡) is a Chinese coffee company and a chain of coffee shops. It was founded in Beijing in 2017. As of January 2020, it has operated 4,507 stores and surpassed the number of Starbucks stores in China. Most of its stores are small collection points in university office buildings or campuses that serve for picking up and delivering orders online.

Luckin Coffee was formed in October 2017 and, in January 2018, had opened its first stores in Beijing and Shanghai. The company continued its rapid growth and, in October 2018, Luckin Coffee opened 1300 stores, surpassing the number of Costa Coffee stores to become the second-largest coffee brand in China. Luckin Coffee has also signed a strategic cooperation agreement with Tencent.

In January 2019, Luckin Coffee announced plans to open 2,500 new stores and outperform Starbucks to become the largest coffee brand in China. Luckin also gained exposure in the U.S. stock market by applying automated quotes to the National Association of Securities Dealers and starting trading on Nasdaq for $ 17 per share. After hitting $ 25.96 on the first day, the stock dropped to $ 16 on the second trading day. At the end of September 2019, Luckin Coffee had opened 3,680 stores and had posted a net loss of $ 75 million in the third quarter of 2019.

Much of Luckin’s expansion was fueled by an aggressive marketing strategy that saw the company spend three times as much as it earned to feed its growth.

The company’s marketing and market appeal are centered around marketing and discounts. Luckin offers freebees, where each new customer is offered a free drink and a 50%-off coupon for one cup. They also offer “buy one, get one free” coupons for loyal customers. These discounts make its price lower than Starbucks and attract a bigger number of returning customers in the early stage of its business. The target customers of Luckin Coffee are those who do not have much time to drink coffee at stores. Let’s be honest who does like a good discount?

Luckin Coffee did not open any traditional brick-and-mortar stores in the beginning. Its physical locations were only for making coffees and fulfilling online orders picked up by customers or delivery persons. Although most of its stores do not have seats or other services for customers and are in less prestigious locations compared to Starbucks, the brand has been able to capture a new generation of consumers and rival Starbucks in China.

Customers need to download the Luckin Coffee App to order and pay for drinks online. Luckin Coffee also cooperates with the second-largest courier in China, SF Express, delivering orders to customers within two kilometers around each store. This operation principle is suitable for Chinese people’s fast-paced lives and puts pressure on other traditional coffee brands.

Even though Luckin coffee is a Chinese brand and offers several services like discounts, delivery, and had a specific target market, compared to Starbucks, it failed. But why?

Luckin missed one of the 3 key points to succeed in China. It was convenient and cheap but had no added value as Starbucks which is focused on :

Branding from focusing on brand awareness and positioning

The Chinese place a premium on gaining and upholding reputation and status, especially for their family and community. Consequently, they want to be associated with brands and products that portray prosperity, success, and upward mobility.

Starbucks has positioned itself as the premium coffee brand in China. It charges 20% higher prices in China compared to other parts of the world. It chooses very high-end locations for its outlets including luxury malls and iconic office towers. And since foreign brands, particularly in food and beverage, are viewed as premium, Starbucks often labels its products with the country from which its products are imported.

Following its successful marketing strategy, by adapting the brand to the Chinese market, Starbucks not only sells coffee, tea, coffee beans, and mooncakes but also sells cups. Its tumbler cups and coffee mugs are very popular in China, which are often sold out in a couple of weeks. All throughout China, cups with the Starbucks logo are everywhere.

Starbucks also has been franchising in China for years. They are well established even in smaller cities. They even have their biggest outlet in Shanghai. It is more than a place to drink tea or coffee, it is a tourist spot!

Read as well: How Starbucks is different in China

How is Starbucks using a digital market platform to reach Chinese consumers?

Every brand that wants to enter the coffee market in China should follow its strategies, adapting to local customs and traditions, creating specific products for the Chinese market, and promoting them on the most famous sites in china.

GMA can help your brand entering in the Chinese coffee market through several services like SEO on Baidu, social media advertising and marketing, e-commerce management.

WeChat has grown to become the most popular social and mobile app in China where it has over 1.1 billion registered accounts.  This social media platform allows users to send text and voice messages to each other as well as play video games, watch videos, shop, and pay via mobile payments.

We chat offers many possibilities to brands, in fact, it gives the possibility to create verified official accounts, useful for interacting with followers and for keeping them updated on brand news. In addition, WeChat offers so-called mini-programs, small apps inside the WeChat system that cover various functions, such as e-commerce, games, and much more.

As well as on Weibo

Sina Weibo (新浪微博) is a Chinese microblogging website similar to Twitter. Launched by Sina Corporation on 14 August 2009, it is one of the biggest social media platforms in China, with over 445 million monthly active users.

Weibo is important for several reasons:

Baidu has no secret for the Starbuck Marketing team

A key operation is the optimization of search engines (SEO). The more you sell, the higher the search results appear. Businesses should invest in SEO and buy keywords based on “pay per click”. The higher the price of a keyword, the higher your products will appear in search results. And the more you sell, the more you position yourself at the top. It is essential to participate in online sales events or industry-specific events such as food weeks.

In China, the B2C model is dominated by the Tmall portal of the Alibaba group, which holds a 56.6% stake.

It is a platform for local Chinese and international businesses to sell brand-name goods to consumers in mainland China, Hong Kong, Macau, and Taiwan.

Customers generally turn to Tmall for Food and beverage purchases, that’s why it is important to build a strong presence in this e-commerce platform, in order to increase sales and brand awareness.

and Dianping, the venues review app

Meituan-Dianping is also one of the world’s largest online and on-demand delivery platforms.

Ele.me is an online-to-offline (O2O) catering and food delivery platform in China, which by 2019 had become the largest food delivery service in China with a 53.4% market share.

Offline and Online: Starbucks Offers a Complete experience to its customers

The Chinese really appreciate their community, traditionally labeled “internal circles”. Be it houses, schools, or companies, they turn to these clubs for loyalty, information, and approval of their choices. With this in mind, Starbucks has designed its commercial spaces to facilitate the meeting of these “circles”.

Unlike the United States, where Starbucks chairs are often the quiet spots for lone laptop users, Chinese Starbucks is willing to welcome crowds, noise, and relaxation. In many cases, the spaces are up to 40% larger than in the United States and have been placed in very visible and easily accessible locations in office buildings (on busy floors or mezzanine areas).

The seating areas are open format and usually have no walls, the chairs seem to flow into adjacent spaces, such as lobbies or walkways.

The coffee giant is not afraid of Showing off the Ingredients it uses:

That’s what Starbucks shows on its website,  a confirmation of the quality of its products :

“Starbucks Arabica beans are different from regular Arabica beans. At every step, we go to great lengths to make sure our beans meet the highest standard of quality”.

“The best beans grow at higher altitudes. The cold nights and warm days create denser beans. And denser beans have deeper, more complex flavours. Taste them in every cup of Starbucks coffee”.

And it is precisely on the quality of its products that Starbuck puts the accent. Unlike its rival Luckin coffee, Starbucks coffees are of excellent quality and their flavor is far better.

Adding Values and Status: A key factor of starbucks success in China

Now, the main difference between Starbucks and Luckin coffee in China is the price. While Luckin was popular because of its cheap price, you need to remember that China is not a land of coffee drinkers. So why would people spend a good amount of money to order a big bag of Starbucks for their colleagues?

To show off generosity and wealth. (Some people do like coffee, and obviously, you can buy tea and many other drinks). Starbucks succeeded in adding social value to its products. Just like having an iPhone is a sign of social status, consuming Starbucks in China is a sign of class.

This is where Luckin failed. It was keeping its customers hooked with cheap prices and discounts but what would have happened the day they had to increase their prices for sustainability reasons?

Contact-us to launch your coffee franchise/shop in China

Do you want to know more about the Coffee brand’s strategy in China? Contact GMA a digital marketing agency, specialized in the Chinese digital market.