Prepared Dishes are making their way into Chinese kitchens 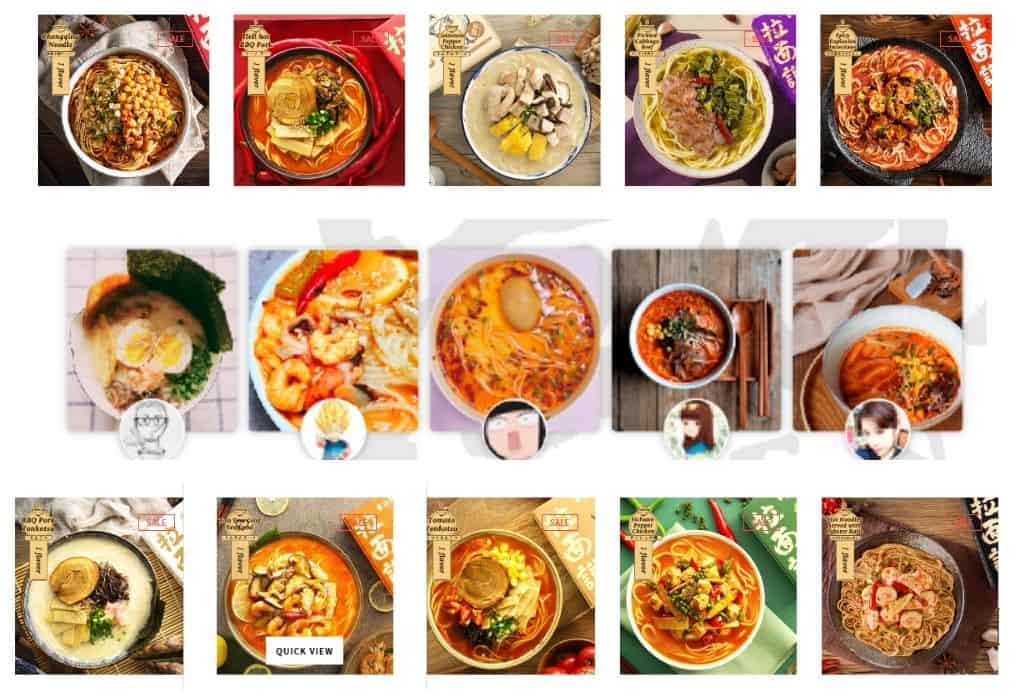 In China, the market for prepared dishes is flourishing.

Among the basic living needs, “food” undoubtedly occupies the first place. During the quarantine period and the closure of the restaurants, people rushing to buy ingredients on the major digital platforms have become the norm.  At the same time, prepared dishes have become the leading choice of many people during this period of isolation.

However, due to problems such as transportation difficulties for the impact of the epidemic, some local supermarkets’ instant food shelves could not be restocked, and it was also “hard to find a dish.”

Data show that since February, the overall sales of instant food on Tmall have increased nearly 7 times year-on-year. And during the epidemic, instant food even becomes more popular.

What are the favorite prepared dishes during the epidemic in China? 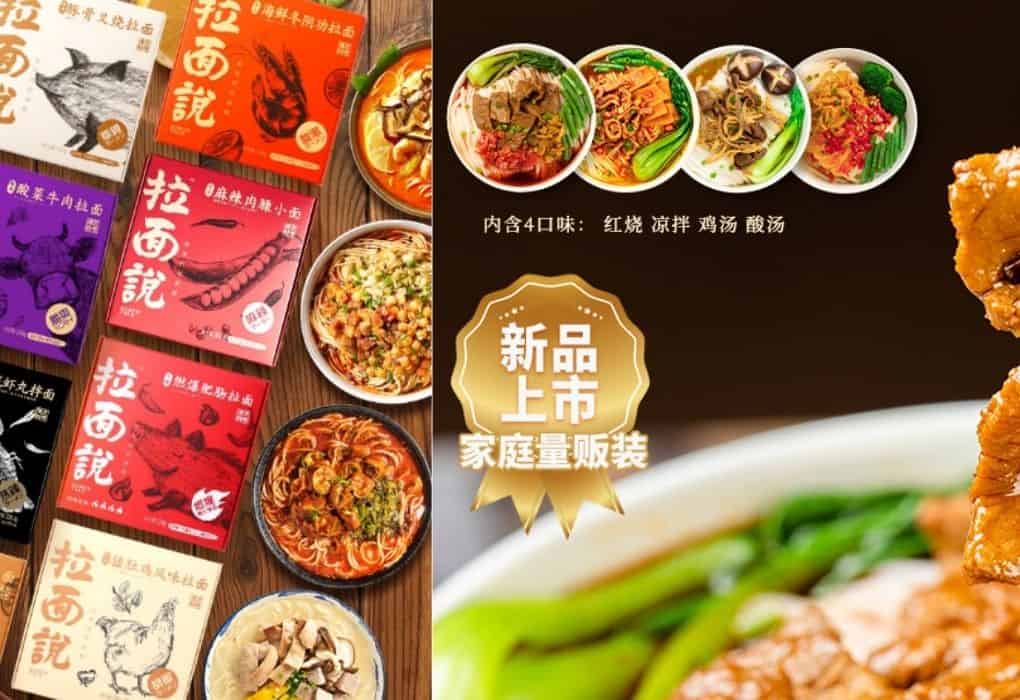 Since February 2020, China saw a rapid growth of various kinds of products of the prepared dishes industry.

The market size of quick-frozen food is about 150 billion yuan, and that of instant noodles is about 100 billion yuan. It is expected that the growth rate of the instant food industry to remain at around 6% in the next few years and the scale of the industry will exceed 630 billion yuan in 2025.

The success of noodles in the prepared dishes industry 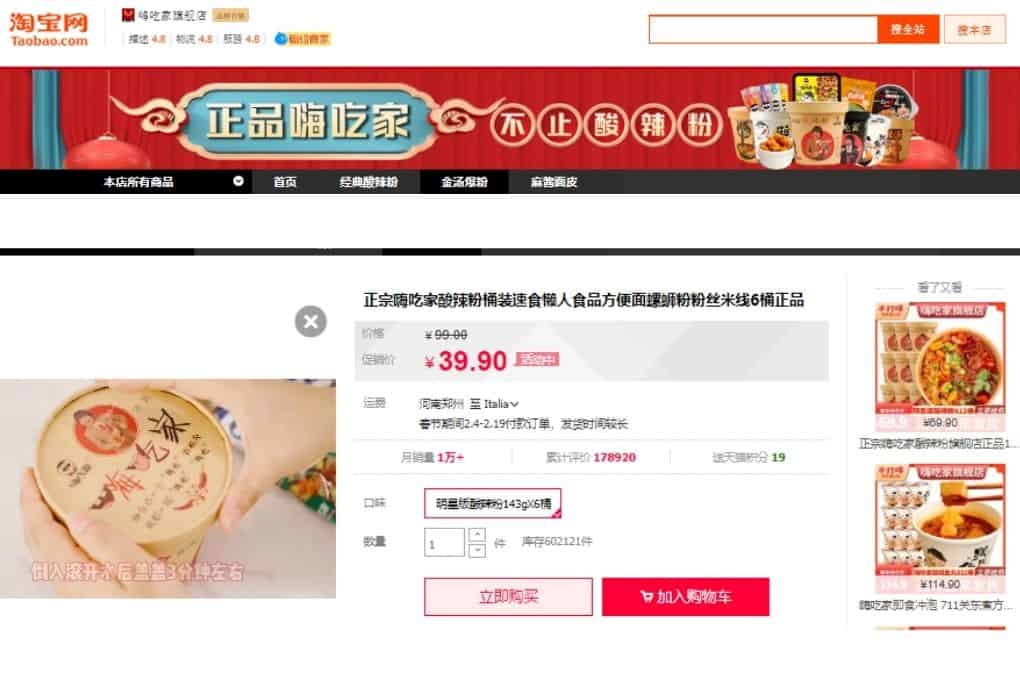 The River Snail instant noodles, also called Luosifen, are a specialty of Liuzhou, a city located in the south-east province of China the Guanxi. Since 2014, due to the impact of takeaway platforms such as Ele.me and Meituan, instant noodle sales have shown a downward trend. In 2019, this negative trend stopped. And since 2020, River Snails rice noodles have become the favorite prepared dish during the epidemic. 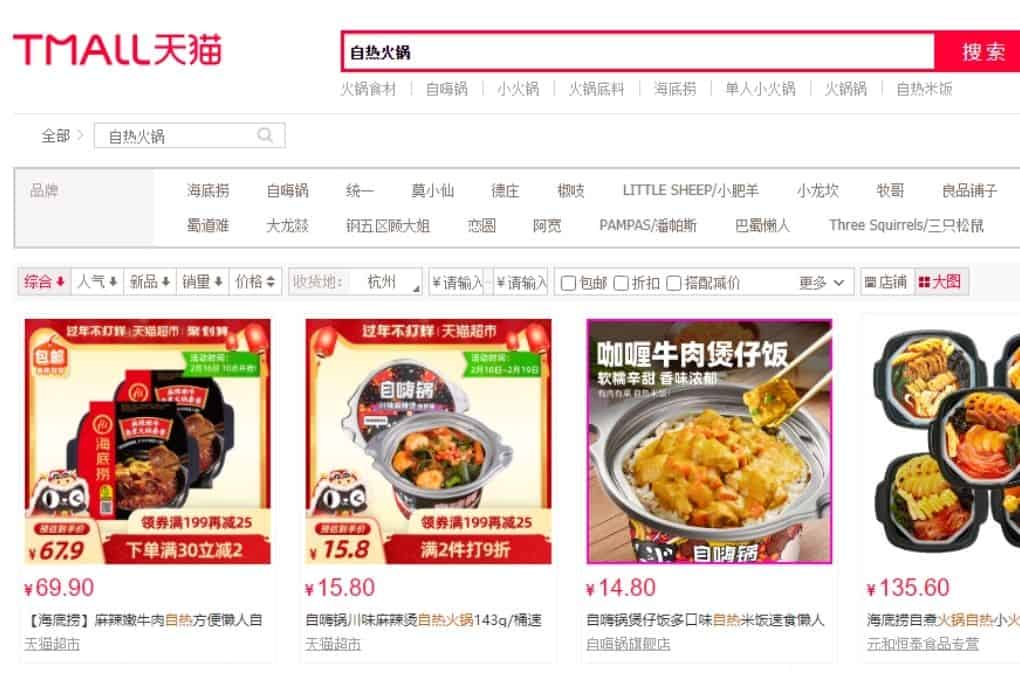 The number of company registrations increased by 75% compared to 2016, and 1.7 million products were sold during Double Eleven that year.

The industry structure of self-heating hot pot products is relatively concentrated. Among the traditional leaders, there are Haidilao, Dalongyi, Xiaolongkan, and Dezhuang quickly entered the game relying on their main business experience. Snack manufacturers such as three squirrels, Liangpinpu, and Baicaowei also joined the battle.

Chinese demand for a healthy transformation of prepared dishes 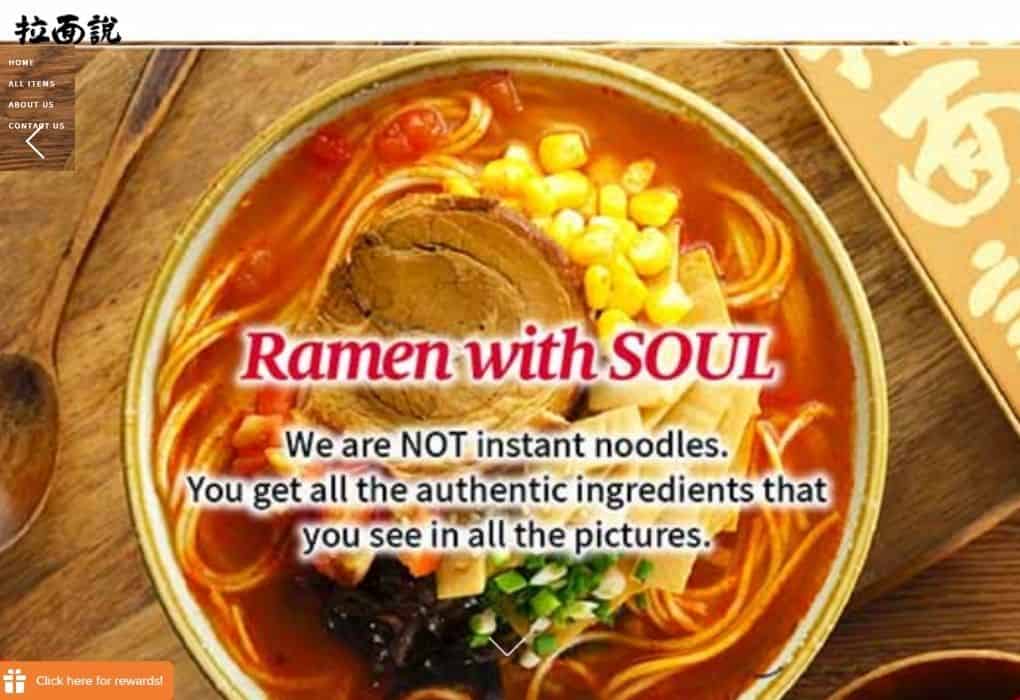 Prepared dishes and instant food have long existed in China. Yao Qidi, the founder of “Ramen Talk” said that the current domestic consumption of instant noodles is 35 packs per capita each year, compared with 48 packs in Japan and 78 packs in South Korea. In his view, instant noodles are a product with a broad mass base. However, under the impact of food delivery platforms, since 2013, China’s instant noodle market has experienced serious data decline.

Undoubtedly, in recent years, as Chinese people pay more and more attention to a healthy diet, instant noodles are also facing the need for transformation and upgrading. High-end prepared dishes emerged in this context. Take “Ramen Talk” as an example. Compared to traditional instant noodles, “Ramen Talk” focuses on “high-end and healthy convenience food”. For its classic tonkatsu ramen uses semi-dried fresh noodles, with barbecued pork, mochi, fungus, green onion, and the refined soup base are designed to allow consumers to cook delicious Japanese ramen at home without going to a ramen restaurant.

Traditional instant noodles are also seeking changes. Many brands well-known for their convenient products have launched high-end dishes in line with the trend of consumption upgrades. “Nutritious, delicious and convenient” are the three adjectives that define the new Chinese demand.

In recent years, high-end noodles also contribute most of the revenue to instant noodle companies. In March 2020, Hong Kong stocks Master Kong Holdings released its 2019 performance report. The report shows that for the whole year of 2019, Master Kong achieved revenue of 61.978 billion yuan, with an increase of 2.13% year-on-year; net profit was 3.331 billion yuan, an increase of 35.2% year-on-year.

What aspects should consider foreign companies before selling prepared dishes in China?

Chinese cuisine includes an infinite number of dishes, so it could sound quite difficult to try guessing what kind of foreign prepared dish can satisfy the Chinese palate.

But what we know for sure is that the Chinese are used to eat and drink hot food and beverages.

Another certain piece of information is that Chinese people love soups. Instant noodles, for example, are dried or precooked noodles in a stock and are the most sold prepared dishes. Soups are not only consumed with noodles but with vegetables and meats.

Even the rice is never eaten without a sauce and they really do not like too dried food, such as hard cheese.

Among the favorite foreign cuisine, there are that of Japan and this love for Japanese cuisine is increasing day by day. Also, they love Korean barbecue, especially in the first-tier cities. And other very popular dishes are Italian pasta and Australian steak.

These are only some basic information about the usual Chinese consumer behavior, but a company should also consider that such common habits are changing. Chinese are more open to try new dishes and sometimes just a detail can change the perception they have of a product.

A famous example is how the company Kraft entered the Chinese market with Oreo biscuits. After having studied the idea consumers have of the western version of the Oreo, Kraft created the new Chinese Oreo biscuit: less sweet, less expensive, and packed in smaller packages.

Chinese consumers do their research online: it is also true for premade food

Although the market is growing there are a lot of preconceived ideas about premade food: tastes wrong, bad for health, and so on. It is important for premade food brands to counter these ideas in order to make it on the market with direct consumers and with distributors. It does not matter if you are looking for a wholesalers or wish to sell directly to consumers, building your reputation online is the number one step to make it in China. 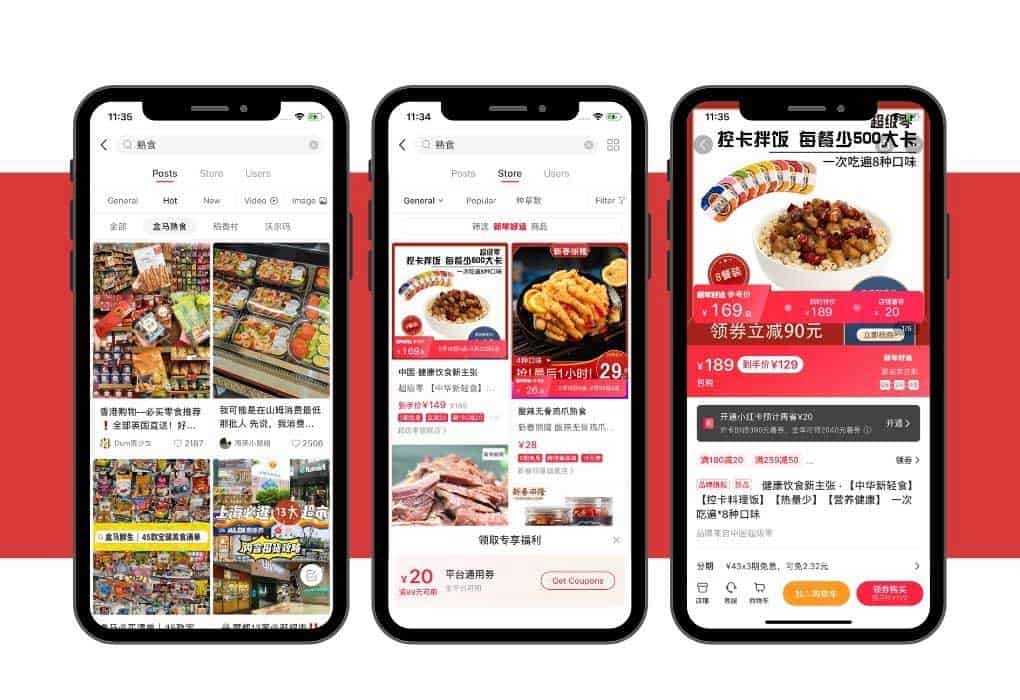 In 2021, Chinese citizens spend on average time is five hours and 20 minutes per day. They do many activities on the web and companies leveraged this trend to create the business, in fact, the Chinese digital eco-system is huge, and is easy to lose your way inside it. Chinese users do everything online and have to choose among different apps for doing everything.

Chinese users can use WeChat or Alipay to pay for a product or borrow money from a friend, book a taxi with the popular Didi app, book an appointment with a doctor through the Chunyu Yisheng app and invest money choosing one among the many tech Giants’ proposals.

Chinese can spend more quickly and rapidly than their western counterparts and this is due to digitalization.

Considering that the Chinese routine includes many hours per day on the internet, a company that wants to be competitive in a such digitalized market must have a strong presence on the web.

After having done some market researches and had known what kind of products a certain target can appreciate, the company should study its digital marketing strategy, that even if varies according to the offer and the demand, it usually shall include at least some of the following digital channels:

Baidu: the search engine to promote your prepared dishes in China 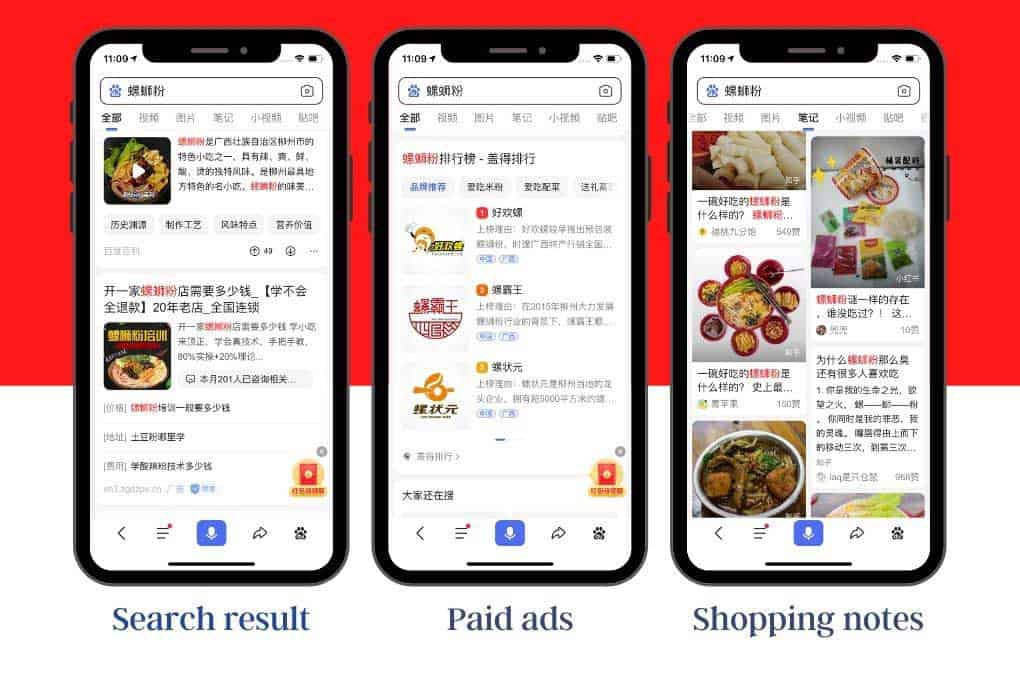 Baidu is the most popular Chinese search engine with more the 70% of the market share. Other popular Chinese search engines are Shenma, Sougou, and Haosou. The relevance of Baidu decreases for mobile usage. This is mainly due to the power of the Chinese tech giant Tencent in the social media field. In China, the most used social media app is WeChat, and it is owned by Tencent, which also owns Sougou. The result is that Sougou is the second largest search engine on mobile research with 23% of the market share, which follows the 42% of Baidu.

Use Forums & Q&A to promote your premade food brand undercover 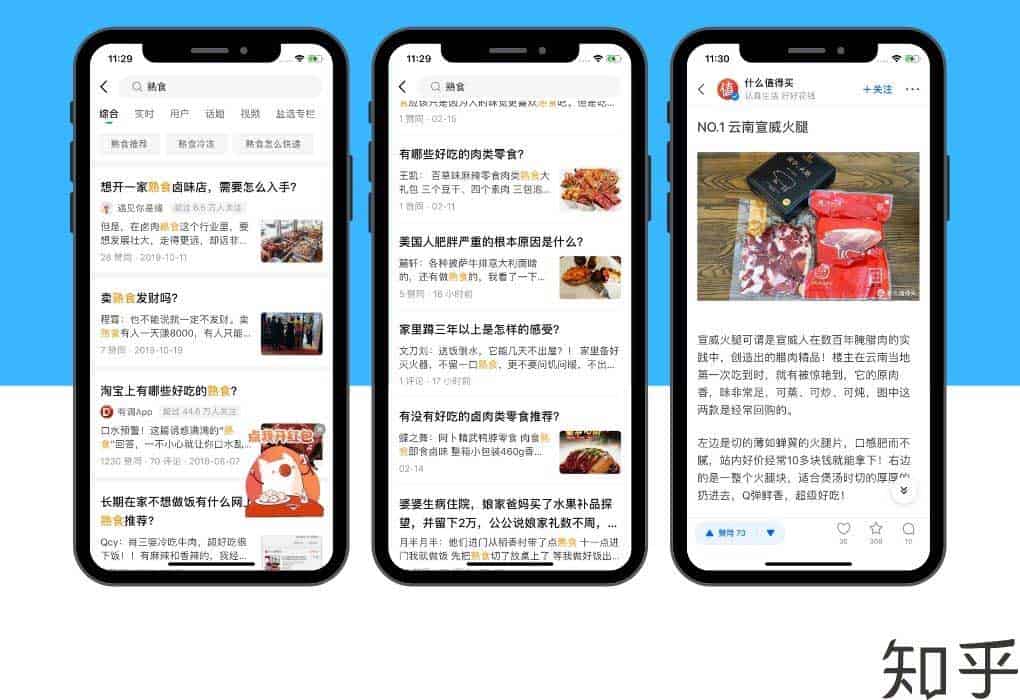 The Chinese equivalent of Quora is Zhihu. Just like Quora, you can write questions and answers and link websites. In this way, you can give and receive reviews about your brands and products and doing SEO.

Do you want to sell to Chinese consumers? You need a store on one or more of the numerous eCommerce channels. Just one suggestion for those who want to sell foreign food in China: the point of strength of foreign products in China cannot be the low price, because surely Chinese can find cheaper products sold by Chinese players. And, considering the increasing interest in high-quality products even in the prepared dishes sector, this information is not so bad. The most used cross-border eCommerce platforms to buy high-quality products are Tmall Global and JD Worldwide. Not by chance, one of the most successful categories of products sold on Tmall in 2020 were prepared dishes.

We are Gentlemen Marketing Agency. Our mission is to help brands enter the Chinese market creating for them the ideal digital marketing strategy.

We can create and manage your Chinese website, your online digital store/s, and social media account/s, make your website ranks first in the largest Chinese search engines and provide you with many other services.

Don’t you believe that? Read our case studies.

Keep reading about the food & beverage industry in China: