Patrick found the solution to be famous : Becoming Chinese ! 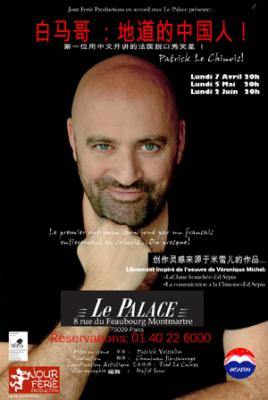 Few months ago, Patrick was only a French humorist who had performed show after show for over 15 years. His only wish was to share his passion for laughing. Last September, during a chat with friends, he realized that even if France is pretty small, the number of humorist is incredibly high.

After making the comparison between French and Chinese humorist, and thanks to one of his Chinese friend, he decided to set an unbelievable bet : creating a performance entirely in Madarin.

Patrick became then the only French humorist that dare to perform his sketch in Chinese.It took only 6 weeks of intense learning to prepare this 1h20min challenge  ! He says that learning how to write characters made him thought that « he was 5 years old again ». However, he never got the chance to go to China… Where does this impressive motivation come from  then ? He took a liking to the Chinese culture and its language, which he considers very wealthy of information. He couldn’t resist to the tall order of surpassing himself and create this unique stand up comedy that has never been done before. No worry, Patrick le Chinois thought about everything. For those of you who don’t have any knowledge in Chinese but still have an interest of it, a big screen will be arranged to all eyes with the translation of the show in character, in French and in English.

The idea is not to reinforce Westerner’s stereotype or their point of view on Chinese. It’s above all else humour and cliché on Chinese intended for Chinese or for people interested in the Middle Kingdom. Patrick wishes to bring into China the stand up and one man show tradition. Make Chinese humour, or at least try, by becoming Chinese himself. To get into the skin of this type of character, he tells his everyday life, the time he spend looking for the perfect wife via classified ad, or making fun of the differences between the community within the country or again shout yourself hoarse during karaoke. We won’t tell you more because it’s your call to discover it !

So don’t wait any longer to buy your tickets !

For this, it’s easy. Patrick le Chinois is performing every first Monday of the month at the Théâtre du Palace in Paris, but also in la Bourse du travail in Lyon and in Marseille. If you’re like us, on the Chinese territory, don’t be alarmed, he has already set up a few dates in Shanghai and one in Beijing in July (other cities are still in discussion).

If you still think that Chinese don’t have any sense of humour, we’re waiting for you at Patrick’s stand up this summer. And if you’re missing this opportunity, rest assured, he is also coming to the United States by the end of the year and to “l’Olympia” in Paris at the beginning of 2015.

If, like us you can’t wait anymore, here’s a little preview :

If you want to know more about this peculiar character, you can go on his Weibo account or on his Facebook one.