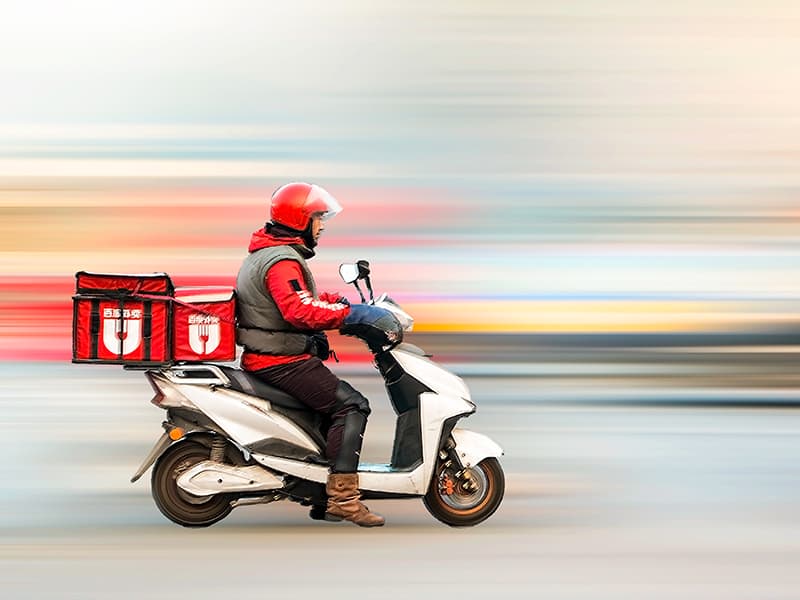 Meituan and Ele.me are the biggest players in China’s food delivery industry, with both apps collectively claiming 102.8 million monthly active users back in December. According to internet data analysis service provider Analysis, the total number of online orders for meals, drinks, and groceries reached 10.96 billion in China last year, doubling this year (it reportedly doubles year on year). This year, Meituan teamed up with Chinese coffee chain Luckin Coffee to deliver coffee and food through its delivery network, after Starbucks announced its own partnership with Ele.me previously.

Asia’s total online food delivery market is estimated to be worth roughly 53 billion USD. China leads Asia in online food delivery, accounting for almost 70 percent of the total market. A study found that almost two-thirds (63 percent) of Chinese people use websites and apps to have their food delivered.

China has seen an increase in its number of delivery-only restaurants, food businesses which serve customers exclusively through online ordering and delivery. Without brick-and-mortar storefronts to maintain, these virtual eateries not only avoid the costs (rent, labor, operating expenses, etc) usually associated with sit-down restaurants but also their notoriously high failure rates (26%), making them an increasingly attractive business model.
The e-commerce giant Meituan launched its latest venture ‘Meituan Delivery’, a short-distance delivery platform that can reportedly complete an on-demand delivery within an average of 30 minutes, also putting it in direct competition with Shandong and JD. Meituan has previously stated its intention to focus more on food and restaurant management and reduce losses from its ride-hailing and bike-sharing services.

The food delivery industry in China is so large and lucrative

The food delivery industry in China is so large and lucrative because of all those Chinese consumers who
make purchases. Over 346 million people in China used online food ordering services in 2017 and now it’s about 355 million. 35% of food-delivery app users order food one to three times a week, and a separate 35% of users order food four to six times a week.
Chinese Consumer demographics are split by gender, income level, with high-income consumers boasting only a small edge, with women making up 51% of food delivery app users. Users are overwhelmingly young, with 75% between ages 18 and 39.

Growth in the restaurant industry is coming from those who are dining at home. Chinese Customers are increasingly ordering food through apps on their smartphones or by calling in.  And that demand for deliveries, from sit-down restaurants as well as the more familiar foods chains, is dramatically changing the restaurant industry.

Besides having to redesign restaurants to take the delivery into account, the phenomenon is enticing restaurants to modify menus and pick ingredients that hold up well during travel.

What are the market opportunities for the existing and entry-level players?

Food delivery services are taking off rapidly in line with the surge in all things online in China, but unlike many other sectors such as e-retailing, the market has come to be dominated by just two players: Meituan Dianping, backed by internet giant Tencent, and Ele.me, whose main investor is Tencent’s rival Alibaba, also the owner of the South China Morning Post.

China is the world’s most populous country and is a destination for just about any restaurant chain that hopes to make it big on this digital stage.

More estern restaurants are joining the ranks of the online food delivery community, allowing customers a greater selection of foods to choose from when ordering. Chinese customers can now discover new restaurants. Connecting restaurants to new customers are one of the best benefits for the industry and also allows customers to be a little adventurous and try a new spot.

We can provide two-hour complimentary interaction with our specialist after the reading of this article. More information click here.