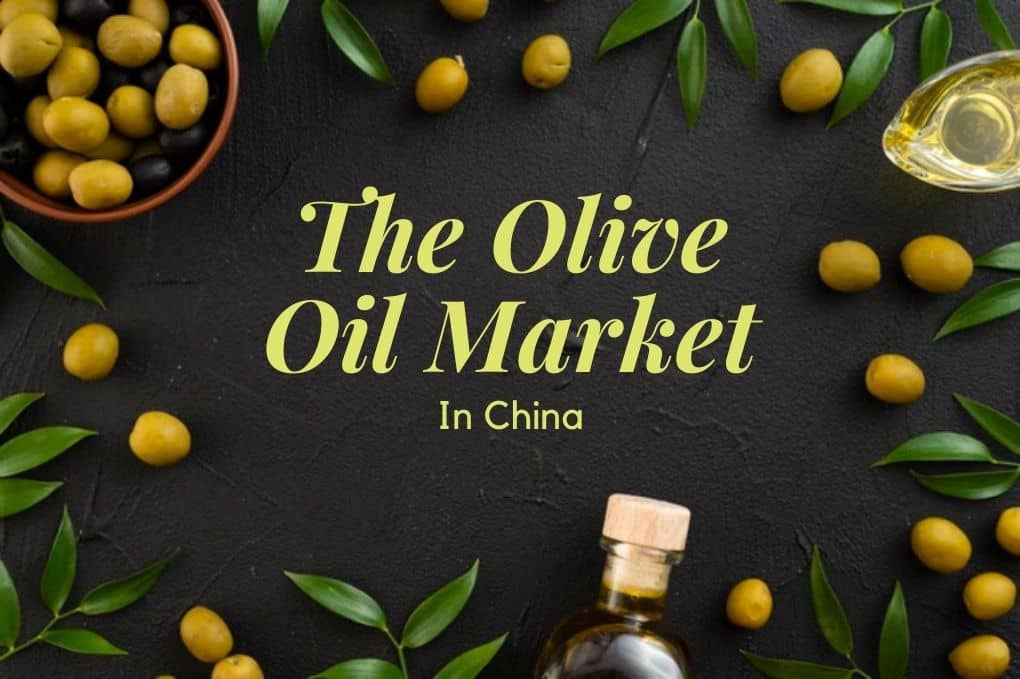 Even though the leading countries in terms of olive oil consumption are Greece, Italy, and Spain, the Chinese market is growing at a fast pace, following a rise in health awareness in the Chinese society and an increase in wages. As the most populous country in the world, China has plenty of opportunities for ambitious olive oil brands looking to expand their activities in Asia. Therefore, because the Chinese market is different from what you might be accustomed to, it is important to know exactly the landscape of the olive oil market in China beforehand. Let deep dive, and learn the best tips to sell Olive Oil in China!

Where can you Sell your Olive Oil in China?

The majority of the Chinese population is buying olive oil directly in supermarkets. They will have access to a wide variety of olive oil, and that’s why it can be difficult for a new brand to directly attract Chinese consumers in supermarkets.

Then, as China is one of the most digitalized countries in the world, you should also consider selling your olive oil on e-commerce platforms such as Tmall, JD.com, Taobao, Pinduoduo, etc.

How to Promote your Olive Oil in China?

As said earlier, China’s digitalization has conducted to the rising use of smartphones connected to the internet. Thus, advertising strategies have changed as well, and brands now have to be active on social media.

Read our Strategic Guide to Export Food Brands in China

Branding: The Key to Success in China

Do you want to attract Chinese consumers? You need to show them you’re reputable and they’ll buy your product. A popular way is using digital solutions, like a Chinese website and social media profile that helps both the consumer find what he/she’s looking for AND generates interest in your company as well!

A Chinese Website Ranking on Baidu: The Door to Enter the Chinese Market

When creating a website for Chinese consumers, it is important to use their language and host the site in China. This will allow you to be found by more potential customers through search engines such as Baidu (the most popular).

Baidu, the leading search engine in China with over 700 million monthly active users (MAUs). Your website must follow Chinese UX standards and be optimized to “please” Baidu’s algorithm for it to rank. Obviously, Baidu prefers mandarin content. Your content should be original and frequent.

To increase your website authority as well as brand reputation, we suggest you combine your content marketing strategy with a PR strategy. Indeed, having trusted third parties talking about your products add a lot to your value as a brand.

Social Media: The Best Way to Increase your Community

Social media in China are even more important in China compared to western countries. In fact, if you want to succeed, you will have to generate “traffic”. In China, we know how to start with, how to help you and develop topics among Chinese citizens on platforms such as:

Chinese Celebrities and KOLs to Promote your Olive Oil Brand

In order to stand out and gain an edge in the market, it is important for brands to encourage their consumers with positive word-of-mouth. With celebrities being so prevalent among Chinese consumers nowadays, they have a lot of potentials when trying to influence them as well. However, collaborating with these high-profile figures isn’t something that can be done just by contacting KOLs as many would think at first glance.

The Key Opinion Leaders (KOL) are social media users who are extremely famous on social media and have the power to make or break brands thanks to their wide community. Chinese consumers “idolize” KOLs, trust them more than brands in most cases. You could use KOLs as intermediaries to reach out and influence the masses. They might have millions of followers, but they can also be really good at influencing people who are into olive oil or living a healthy lifestyle! Through them, you will be able to increase considerably your sales as well as increase your brand awareness and e-reputation. In other words, intermediaries can be a great asset in selling your imported olive oil to Chinese consumers.

Following globalization, consumers’ taste, in general, has changed over the years, with a variety of products and culinary dishes that are now available everywhere in the world. For centuries, olive oil was considered an exquisite product. Used for cooking, frying food, or in a salad, we can easily find olive oil in every supermarket around the world. Its popularity led to the trend of putting olive oil in everything, from cosmetics and pharmaceutical products to soaps.

According to the European Commission, the production of oil was mainly coming from the EU. Then, if we look at the leading non-EU countries producing the most olive oil, Turkey is leading, followed by Morocco (registering a 17% increase compared to 2019) and the Syrian Arab Republic.

Now if we look at the leading producers of olive oil worldwide, Europe is leading the market, with Spain which is far ahead, as it accounts for more than half the global olive oil production, followed by Italy, Portugal, and Greece.

Overview of the Olive Oil Market in China

China’s consumers are becoming more cautious than ever before. Knowing this, it is important that foreign brands entering the Chinese market know how to deal with them or else they risk losing a huge chunk of its population due to mistrust and fear.

Foreign food companies looking for success in China need only look at scandals from domestic brands like Shanghai Husi Food Co Ltd., which was found selling expired meat products, as well as contaminating soy sauce. These incidents have shaped people into being ultra-sensitive about what goes into their mouths; an unfortunate consequence when you’re trying to sell your product on someone’s stomach!

Olive oil brands from Spain and Italy are highly recognized by Chinese consumers, who prefer them over China-made products. In 2016 the government of China lowered tariffs on imported Italian olive oils to make it easier for more companies to enter the market. As a result, many olive oil producers were able to attract even more Chinese customers.

Despite the fact that olive oil consumption is still recent in China, imports are in constant growth. The growing trade figure had also pushed Chinese companies to seek takeover targets overseas that could help meet the demand for olive oil back home. If we think in the long-term, rising per capita income, an increase in the number of middle-class people, and increasing demand for more sophisticated food, this trend will last in the future as Chinese consumers are highly dependant on foreign olive oil.

Why are Chinese Consumers (and Distributors) buying olive oil?

As a matter of fact, soybean oil and rapeseed oil were used by the majority of the Chinese population. But because of the shift in consumption of the Chinese middle-class, people tend to buy foreign olive oil. So, as an imported food product, we can wonder why is olive oil becoming more popular now?

A few years ago, ‘Di Gou You 地沟油 ‘ (gutter oil), an illicit cooking oil that has been recycled from waste oil collected from sources such as restaurant fryers, drains, grease traps, and slaughterhouse waste has raised health awareness among the Chinese population. The rise of scandals, exposed by local media, regarding gutter oil has led them to seek alternatives to domestic cooking oil, which is an important ingredient for almost every dish.

One of the main reasons for olive oil’s popularity among Chinese consumers is its health and virtue benefits. As a matter of fact, olive oil is rich in vitamin E and does not contain preservatives as they are made from natural ingredients. Moreover, it is also used to lower the risk of coronary disease, preventing cancer, reducing inflammations, as well as preventing cardiovascular diseases and cholesterol.

Olive Oil as a Gift in China?

High-quality imported food products are really common presents in China, such as wine and spirits, cosmetics, but also olive oil. Even if it might seem weird, some high-quality and renowned brands of olive oil are popular gifts in China. According to Daxue Consulting, more than 60% of the total olive oil sales in China are intended for gift purposes.

In a country where ‘Mianzi‘ (面子) takes precedence over everything and it is always well-seen to give a rare or expensive present. Literally translated as ‘Face’, ‘Mianzi’ idiomatically means dignity/prestige or ‘to save the face’. It is a subculture in China strongly rooted in people’s minds and that is deeply influencing Chinese consumer’s daily life. A quality gift is a must, a show of respect to the other person.

Healthy imported oil like olive oil is usually better packed at a relatively high price which makes it a perfect choice as a gift. During festivals, olive oil sales are increasing compared to other kinds of oil.

Olive Oil is More Affordable than Before in China

Even if foreign olive oil is more expensive than usual oil, for example, the fact that the price was a big obstacle is no longer true in the Chinese market. Conscious of the benefits it has, they are willing to spend a few yuans more in order to purchase quality products instead of buying cheaper domestic oil.

Having a well-known and reliable brand is key to success in China’s olive oil market. Gradually, the competition in this market was made according to branding strategies. Good branding instills consumers’ confidence. Needless to say that without proper branding, your product will be like any other olive oil product, and Chinese consumers will not even pay attention to it.

Moreover, because of the various scandals of fake olive oil being sold along with real oil, it has become essential to adopt a different packaging from competitors and fake sellers and promote it effectively.

Contact GMA to Get Started in the Chinese Olive Oil Market

Lead generation is an important part of any business, but sometimes it can be difficult to know where you should focus your efforts. You need a good e-reputation first and then invest in online advertising as well as quality content. The key is being able to measure the results so that way you are improving continuously! For those looking for lead generation experts who have experience with this process successfully, they will want our agency because we get an average of 350 leads per month by applying these methods for the agency’s marketing.

An International and Chinese Team

We are a French/Russian/Bristish/Korean and Chinese team here to help you grow your business in China. We understand the needs of both foreign brands who want to enter into the country as well as those native consumers who make up so much of its population.

Send us an email or visit our offices, so we can discuss how to promote effectively your business in China.

You can also contact us to receive our F&B Case studies, we already helped more than 80 Brands in the F&B industry in China.