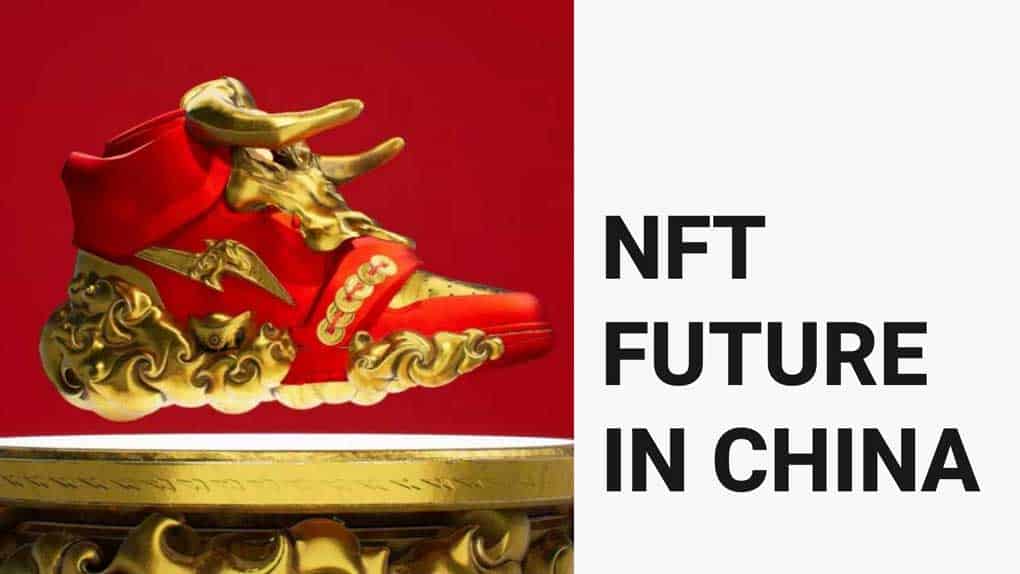 Non-fungible tokens, or NFTs, refer to a set of digital collectibles safely stored and authenticated on the blockchain. These digital assets could represent various real-world objects, like in-game items, collectibles, paintings, songs, videos, autographed tweets, emojis, digital yuan, and more. As its name suggests, an NFT is unique and cannot be substituted or replicated, unlike fungible assets such as bitcoin.

With real-world assets being “tokenized,” buying, trading, or selling becomes easier while preventing fraud. Moreover, an NFT can represent property rights and people’s identities. One example is the file of one of the popular digital independent artists Beeple, or Mike Winklemann, which contained 5,000 pictures. It took him 14 years to complete the piece. Auctioned as an NFT, it was sold for over $69 million. The Chinese NFT market is growing at a fast pace, so we’d like to take a look at what is behind NFT technology.

Are digital collectibles legal in China?

The Chinese government is not inherently opposed to NFTs so long as cryptocurrency transactions are not involved. This is in line with NFTs being labeled as “digital collectibles” or “virtual collectibles” in China rather than “tokens”, which is the term commonly used in cryptocurrency. The volatile and unpredictable nature of cryptocurrency and its potential to facilitate unlawful economic objectives led the Chinese government to take a prohibitive stance against such virtual currencies.

Nevertheless, NFTs themselves do not seem to put the Chinese public interest at risk and, thus, do not warrant negative government intervention. Tech giants like Tencent and Alibaba are actually investing huge pools of money in NFT platforms as a secondary market.

Moreover, a state-sponsored BSN or Blockchain Services Network aimed at bolstering the NFT industry in China launched in January 2022. Only the Chinese yuan can be accepted as payment for fees involving the use of the BSN. Also, unlike crypto-transacted NFTs, this BSN will give companies and users a platform to create their own mediums within which to manage their NFTs.

Given the cryptocurrency restrictions set by the Chinese government and the lack of comprehension and dissemination of this rising industry, the development of China’s NFT market may fall behind that of its Western counterparts.

However, non-fungible tokens are gaining more attention in the country’s crypto community, with several enthusiasts exploring different fields. There is a growing number of new Chinese NFT platforms, NFT collections, or NFT marketplaces, as major Chinese companies just jumped on the NFT bandwagon.

Committed to redefining the fintech industry, Candaq Fintech Group helps us incubate various fintech and blockchain businesses. In 2020, the group was at the forefront of organizing NFT’s first local investment roadshow in Hubei Province’s capital, Wuhan.

The venture capital firm CryptoC is also involved in incubating investments in financial infrastructure, DeFi, blockchain, Web3, and more. Major teams are in the Netherlands, Germany, and Shanghai. They have CryptoC Benchmark, a system for technical due diligence on various blockchain projects. Different investors and institutions can seek advice from them when it comes to these blockchain projects.

Meanwhile, the research-driven venture firm named IOSG Ventures works on Web3, infrastructure for the decentralized economy including NFT, and open finance. They’re present in the U.S, Singapore, and China.

Whether our early-stage project falls under blockchain, cryptography, or financial technology, the firm can make the investment. They also create developer communities, provide funding for academic research laboratories, and offer the resources to help promising teams succeed.

Existing within the expansive virtual world of Decentraland, Dragon City is a virtual city that is the first to showcase Chinese motifs and culture from all points in time, even the future.

Being created by Metaverse Labs, this platform got its public debut in July 2020. From the time of its launch, it now serves as China’s biggest virtual blockchain world.

The growth of Dragon City is a testament to the increasing number of crypto players in China, proving that there is a huge market in the country for the NFT industry.

Given the challenge of declaring ownership of a specific artwork, monetizing digital art used to be difficult. Fortunately, NFTs maintain the security and uniqueness needed for arts. These artworks are then stored and authenticated on blockchain and can now be traded easily.

In Beijing, Ullens Center for Contemporary Art, or UCCA Labs, launched its first NFT exhibition “Virtual Niche: Have you ever seen memes in the mirror?” It displayed the crypto art of over 60 artists, including Robert Alice and Ellwood. One of the works featured was Beetle’s “Everydays: The First 5000 Days.”

Celebrating both the crypto community and the art community, the exhibition gained enormous attention and coverage from the media, both locally and internationally. It sparked conversations related to art, finance, and the Internet. This demonstrates the Chinese public’s growing interest in NFTs.

Alipay’s 8,000 limited-edition non-fungible tokens were also launched in China in 2021. These NFTs are mainly based on Dunhuang Caves’ ancient artwork. In this cave, several pieces of Buddhist art, dating back to a thousand years old, could be found. Selling these items was quick and easy.

Moreover, the giant social media and gaming company Tencent came up with an NFT trading platform Huanhe. After artwork and audio NFTs were made available on the platform, they were sold in no time. NFT trading platforms are another thing gaining popularity in China.

From pricing and auction, to even blind box distribution, the trading platform available for NFTs already has different modes available. Creators are likewise given a wide range of options for where to sell their NFTs. They can sell their digital product and audio collectibles locally via the platform itself, or they can sell to overseas clients by synching with Rarible, OpenSea, and other international secondary trading platforms.

Several contemporary art companies are also becoming active in the NFT market in China while aiming to build an ecosystem of digital arts and other collectibles. Multiple art exhibitions focused on Chinese NFTs have plans to launch in Shanghai and Beijing.

More companies are acknowledging the abilities of promising crypto artists as shown in their willingness to sponsor the development of their artworks. One example is a crypto artist in Beijing named Chen; he shared that two organizations offered him financial support so he could accomplish his artwork.

There also exists a government-authorized “alliance” of blockchains that is maintained by selected private companies. Ant Group Co. and Tencent Holdings Ltd. spearheaded this alliance. Ant Group Co, in particular, sought the participation of art establishments, such as galleries and museums, in using the company’s blockchain technology in issuing their digital collectibles.

This campaign was called the “Treasure Project”, which currently has two dozen museums in China expressing their intent to participate. In recognition of the Chinese Year of the Tiger, these museums are poised to issue NFTs of tiger-inspired Chinese artifacts.

Another illustration of the potential of NFTs in the Chinese art industry is that thousands of digital pictures of a historic Chinese sword, the “Sword of Goujian”, were sold in a matter of minutes.

The NFT market in China also includes real-world assets like music. One great example is the release of the first local NFT of digital music, called “WATER KNOW”. It was performed by renowned singer, A Duo. The song sold for over RMB 300,000 in an auction. Merging blockchain technology with digital music transforms the music scene. Also, given that NFTs cannot be forged, each process can be easily traced, making the system more reliable.

The first luxury brand focusing on the NFT space is RTFKT. They are the source of a wide range of viral digital creations, ranging from exclusive collectibles to memes. RTFKT makes use of the newest technologies in the virtual space such as AR, blockchain authentication, NFT, and in-game engines. Its ability to deliver popular sneaker designs is even compounded by its long experience in manufacturing unique footwear.

RTFKT partnered with Nike, launching a virtual pair of sneakers. This long-awaited project shows that Nike, like many other luxury and well-known brands, wants to be a part of the metaverse journey in China, launching their NFT collections on this secondary market.

As a demonstration of its design prowess, RTFKT released a special, virtual sneaker design that is made of pure gold. The catchy features of the sneakers and the timeliness of its launch during the Lunar Chinese New Year holiday ended up giving the design a commanding price of $28,000 on the Treasureland digital public auction.

The rising NFT market in China is prompting popular luxury brands to adopt and create their own NFT products through partnerships and collaborations. A recent example is a collaboration between the luxury brand LVMH and the popular game League of Legends. Co-branded skins for the roster of characters were sold in the game, mutually benefitting both companies.

The metaverse and virtual reality market are growing fast in China. NFTs from luxury brands, metaverse shops, virtual fashion shows are gaining popularity, and Chinese consumers are excited to be part of this new trend. Being a very tech-savvy society, they are eager to experiment and learn more about NFTs, so they are keen on discovering new NFT and metaverse releases of their favorite brands.

We can help you understand the metaverse world in China and see how can we help you jump on this trend with your brand. With more than 10 years of experience, we have the needed know-how and we will be glad to help you succeed in China.

Don’t hesitate to leave us a comment or contact us to learn more about NFT marketplaces, NFT transactions, virtual reality, and NFTs in China in general. Let’s keep in touch!