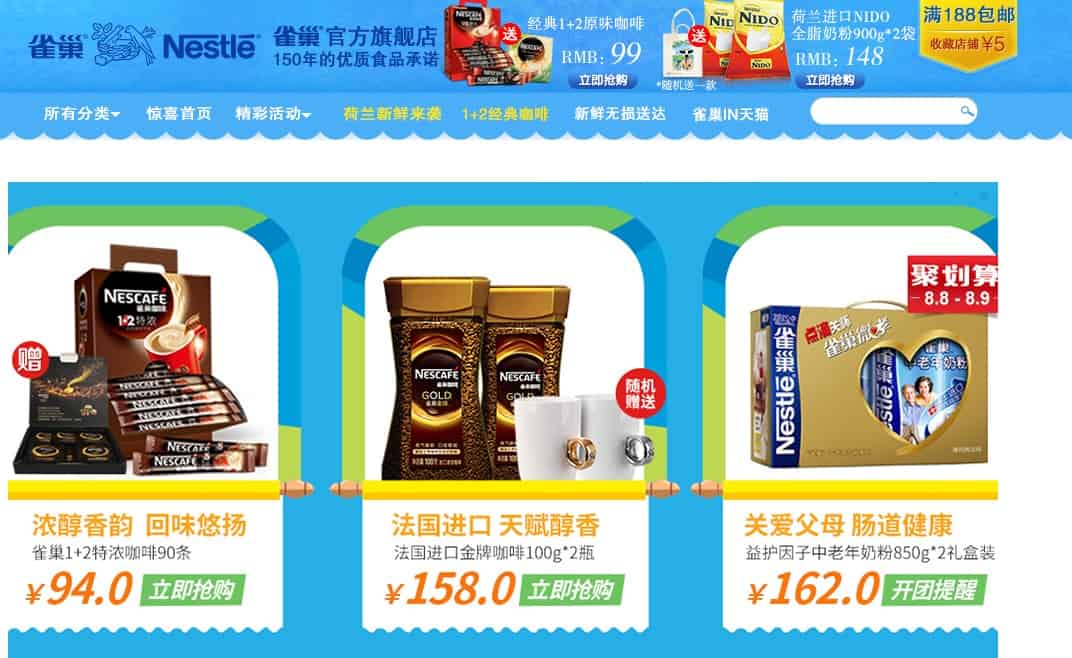 Chinese e-commerce and China’s huge market in general are perceived as a very difficult nut to crack. Language barriers, cultural misunderstandings, and a very competitive environment make companies less eager to jump in with both feet. Once you are active in China, you are competing with other major brands looking to increase their Chinese marketshare. In this article we are going to delve into how Nestlé maximised their visibility.

Tmall (Alibaba): The Place To Be

Before exploring Nestlé’s strategy, let’s talk about Alibaba a bit. The firm owns the two biggest ecommerce platforms in China: TaoBao and Tmall, which are essentially two sides of the same coin but it is the latter that particularly interests brands. Firstly, it is the platform with the greatest entry restrictions (both legal and monetary, the company must own the trademark of the item it sells). These requirements result in a higher level of trust from consumers towards the brands and products being sold. There are far less counterfeit goods and unreliable companies being promoted compared to Tmall’s twin platform, TaoBao.

Describing Alibaba as merely an ecommerce platform would be an understatement: it is a whole ecosystem in and of itself. Not only is this the largest platform for online sales in the world (sorry Amazon), but it is also China’s largest distributor of goods, far ahead of Walmart, Carrefour or any other physical retailer. Alibaba’s distribution infrastructure is the most extensive in China.

… Has history with China

Of all Western brands present in China today, few can claim to have started business in the country more than a century ago. In 1874 the first brand name to be logged in the Hong Kong registry belonged to the Nestlé Group.

Naturally, the real game changing investments only began in the 80s due to the more open economic policies pioneered by Deng Xiaoping.

… Is already present in China and online

Nestlé China already sells a wide range of products in the Middle Kingdom: food products for children, the elderly, mineral water, coffee, etc. And overall sales are good and steadily increasing. Nespresso is one of the flagship products making the brand stand out in the world of Chinese e-commerce.

But this is not enough for the Group which plans to launch a true digital invasion in China with it’s wider products range.

Nestlé and the Digital Assault on China

The project: A Marketing Innovation Point

The Swiss group is committed to developing its business in China, and has the means to back this ambition. Nestle started a six month campaign with no less than 67 new products available on Tmall for the first time in China, this included: Nescafé (France), Damak (chocolate Turkey), Nido (milk powder from the Netherlands) and many other nutrition-related products.

But this is only the beginning, during the 3 days of its “super brand day” a total of 154 products from 30 brands owned by the group will be on promotion.  The campaign did not stop there,  they hope to exploit all the tools and services provided by Alibaba. For example: the ability to use users’ data to provide a personalized shopping experience and therefore to show targeted advertising on social networks, online magazines and phones.

They plan to show their products with different  national “flags”, a system Tmall has developed to represent local products in each country. Video is not left aside with content produced for video platforms. As well as traditional video, a virtual reality campaign is also planned, even if the technology involved is still in its infancy.

Not only about sales: A chance for branding

Tmall is the perfect place for western brands to start their branding in China. It is the starting point of the brand experience for Chinese consumers. Nestlé claims three-digit growth in their online business with online sales volumes now surpassing in store sales.