Meilishuo, a shopping guide for the Chinese women

Meilishuo, a shopping guide for the Chinese women

Meilishuo.com was founded in 2009, specializing in women’s fashion. The name Meilishuo means “Beauty Talk/ Conversation on Beauty”. This website helps Chinese women to find the ideal fashion brand in China, such as clothing, cosmetics products, bags, shoes, and accessories that are best suited to them. Users can search for experts, shops, and group buying, and they can also share online shopping links and information on their favorite products. When people surf the website Meilishuo, it’s just like walking in a shopping mall.

The number of registered users has reached 150 million since its launch in March 2010. The daily user volume is 3.2 million while the daily number of page views is 164 million, and per-user traffic is averaged at 51 pages.

Meilishuo focused on 20-35 years old white-collar and semi-white-collar women only, who have the leading spending power in China. Around 35% of Meilishuo’s users are in top cities such as Beijing, Shanghai, Guangzhou, and Shenzhen. Also, a lot of users are in booming areas including Jiangsu, Zhejiang, and other provinces in China.

There are three types of Meilishuo users: Super-users who produce most of the content and use the platform as a conduit for personal expression. These users can be celebrities, designers, or just particularly engaged users. Then there are the consumers who regularly browse and share content from the catalogs, serving as viral conduits. And finally, there are the “mass users,” who come to the site on a casual basis whenever they need to buy something.

In the last years, Meilishuo has had a relationship of cooperation with the third party sites, the e-commerce sites, primarily Taobao which is Chinese largest e-commerce site. The products listed on Meilishuo come from third-party websites and when users click on the photos of products, they are re-directed to the buying page on Taobao.

But since October 2013, Meilishuo took a big transformation: it stopped the collaborative relationship with Taobao and became an independent website not only for the shopping guide but also the e-commerce site. The reason according to Meilishuo is that in the year 2013, Meilishuo brought more than 3 billion RMB amount of business, but the commission that Meilishuo could get is only ten million RMB. 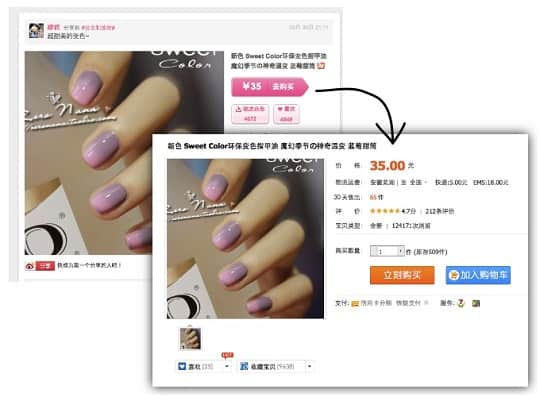 Since the rupture with Taobao, Meilishuo developed quickly a business transaction system. Besides, it reinforces the cooperation with Tencent. In fact, from the beginning of Meilishuo, the most of users come from QQ and QQzone.

Users can use their QQ account to log in to the website (with no need to create a new account) which is beneficial for the website owner who can know more about their users. So if users access Meilishuo through QQ interconnection, when they find a good dress, they can click “share”- and then the dress information will be posted on their QQ-zone (which means their QQ blog).

After accessing QQ, the total traffic and number of users of meilishuo.com increased by 20% and 70%. In other words, utilizing QQ interconnection for attracting traffic is a win-win promotion method for both Meilishuo and Tencent.

On the other hand, Taobao stopped the service Alipay, it’s also a big problem for Meilishuo. But now, it can use WeChat pay from Tencent, and there are also some promotions with WeChat pay.

Meilishuo.com has also pursued Mobile App to promote on the mobile internet. Now users can enter the site via IPAD / IPHONE and ANDROID ports as well. Data from 2011 shows, that the download of the Meilishuo App has overpassed 10 million. 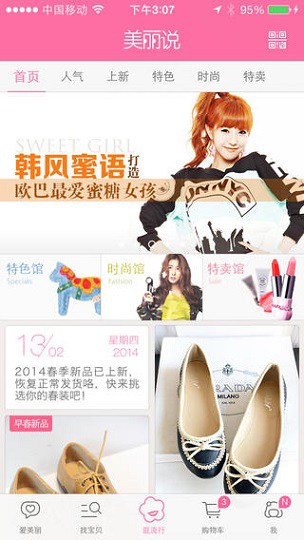 Meilishuo.com has official accounts on generic social networks such as Tencent Qzone, Weibo, as well as Wechat. There are now more than 40 million fans globally. In this networking society, social media are the ways important and efficacious to touch more fans. The social networks of Meilishuo can help gain more attention and spread information.

We are a Social Media agency in China

We can help you to develop your presence on Chinese social media, like MeiliShuo, Mogujie, and WeChat Weibo Littleredbook.