Today,  we interview Isabelle Patissier, a woman with a incredible career…

Hi Isabelle, could you present yourself ?

My name is Isabelle Patissier, i am born in Lyon and i had the chance to learn climbing from my childhood, but also to the mountains and ski. Climbing immediatly became a passion, and then my work during 10 years… After that, I launched a secon passion, the automobile sport, and more especially the rallye-raid, with its mystic ride, the « Paris-Dakar rally ». 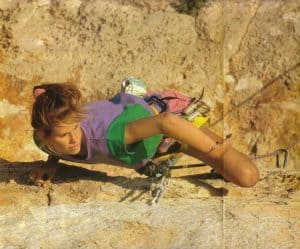 I was part of the French climbing team during 10 years, I have been world champion two times and french champion four times, and one time co-chamion of europe. Then, I decided to stop my career to go back to study a few years, before launching myself in another challenge : the « Dakar »… I have been world champion of raid-rallye in 2004 in category production with Nissan France, and I have nowadays 11 « Dakar » under my belt, and many raid-rallyes in Tunisia, Morocco, Dubai, Oman… And since two years, I have created a steering school in Morocco, to train the interns to driving in the dunes.

Your most beautif trophys, success

In climbing, it has been hard to win the climbing world champion title because it’s the accomplishement of many years of training, hard work to do it. It’s the absolute graal in raid-rallye, it has been my first world champion title. The automobile sport is an exclusively male environment, and it’s not easy de win its place. But I also used all the methodology that I worked out in climbing for raid-rally, and it worked pretty well. 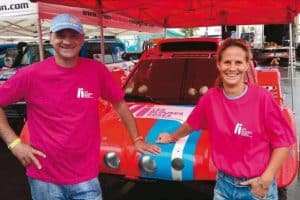 What kind of relation do you have with China since the beginning of your career ?

I have been to Hong-Kong for two weeks in the 90’s to make a climbing movie about bamboo scaffoldings, and i have been seduced by this city that used to swarm of people, cars, noises, and I decided to come back one day.

Fortunately, China is attending a raid-rallye in next July at Beijing, the Silk Way Rallye

What makes the strenght of a champion ?

The will and determination. When we have a purpose, nothing can stop us, but it’s also a lot of hard workd and self-abnegation. Our entire life is dedicated to our Sport.

You just launched a Weibo account, what’s the goal of it ?

The goal is to develop my notoriety in China, to come do raid-rallye in this country. The Silk Way Rallye will take place from the 9th to the 24th of July, but also the Grand China Rally in September 2016 or 2017… The Weibo here

When are you coming to China ?

I am coming to China for the 16th to the 22th of February 2016 and I am really impatient to come.

Any question to Isabelle ? Feel be free to lat a comment.