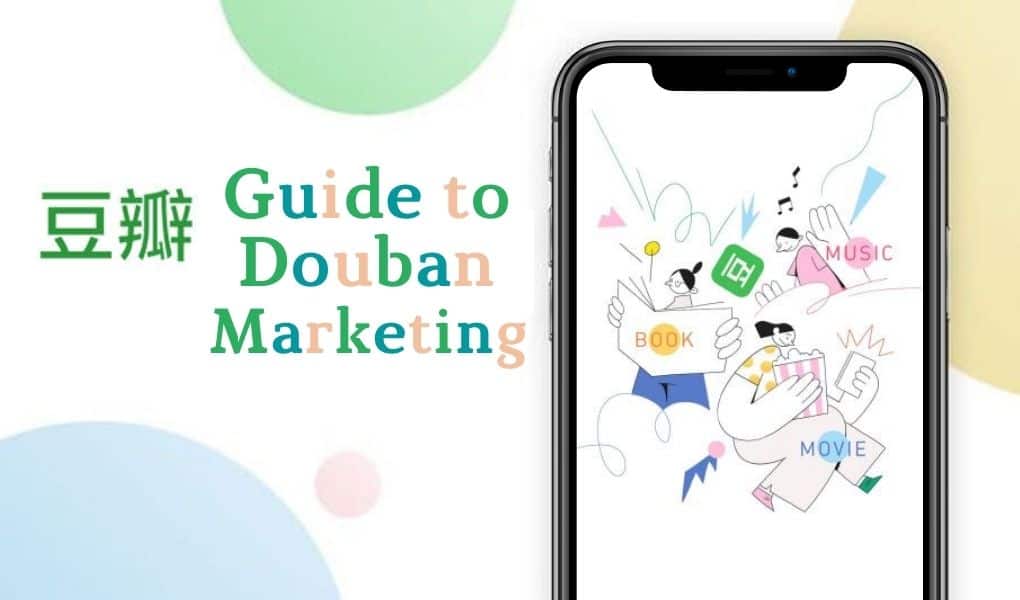 With the prevalence of mobile devices and instant messaging apps, China’s social media landscape is becoming more diversified. With more than 988 million internet users, China’s tech-savvy population has embraced new technologies at a faster pace than anywhere else in the world. For those who want to expand their activities in the world’s most populous country, it has become essential to focus on online platforms for advertising and marketing. In this article, we will focus on Douban, an app that is indeed not as popular as WeChat or Weibo but still is among the most popular apps in China. In order to help you understand how you can use Douban as part of your marketing strategy, we will present Douban’s landscape and explain its several services.

Launched on March 26th, 2005, Douban (豆瓣) is a Chinese social networking service website and app. Being more than just a social media like Facebook or Twitter, Douban is indeed a vast ecosystem of services. Over the years, Douban has been able to attract Chinese netizens and has grown to a whopping 300 million monthly active users that span all ages and backgrounds.

So what’s so special about it? We can pretty much say that Douban is like a combination of IMDb, Goodreads, Facebook, Blogger, Spotify, and Ello. People can post reviews on movies; create lists of movies they want to watch; share their favorite books with friends, etc., you will find forums dealing with a variety of topics depending on your tastes: TV shows are ranked by popularity, while music lovers can create playlists that they can share on the platform.

As we can see according to this statistic, Tencent’s WeChat still remains the most popular mobile app with 73% of respondents saying they used it frequently in a survey conducted this past October 2019. It was then followed by QQ, Weibo, Momo (an Instant messenger), Zhihu (a Q&A website), Tantan (a dating app) along with other smaller networks like Lianke or Douban, that are having significant success among Chinese netizens.

Who are Douban users

With over 300 million monthly active users on Douban, it is estimated that Douban has 180 million registered users and that 100 million are using the app without registering. Being extremely popular in 1st and second-tier cities, Douban is mainly used by degree-holders living in major cities, and having a middle-class lifestyle.

The majority of them were born between 1985 to 1995, and are using it as a forum-like platform sharing their opinion and reviews on a diversity of topics. In terms of ratio, there are 52.3 female and 47.7 male users. Thus, unlike Weibo for example, Douban appeals to white-collars, literate and sophisticated people.

“Most of the users live in major big cities of China. They are office workers, artists, freelancers and students who share common interests in arts, culture and lifestyle.”

Why does Douban matter for businesses?

Unlike other popular social media platforms, Douban is more like a niche-focused platform based on the principle of a community, as its organic content is generated by users according to the number of reviews, the ratings, etc.

Moreover, Douban is accessible to everyone, not only in Mainland China, but everywhere in the world, and without having to register on the app! Unlike almost all the platforms (Western platforms included), people can have access to its services without logging in or creating an account, which is extremely useful for people that are just using it casually.

Why is Douban a great marketing tool?

Douban is a wonderful tool for marketing as it focuses on expressing oneself and one’s lifestyle. Users often post content to talk about movies, books, music, or even events. The landscape of the app constantly shifts with trends emerging and dying off relatively quickly in comparison to other similar platforms such as Reddit, where information can overwhelm someone’s feed, allowing him to explore some topics more deeply.

Overall, Douban allows users to download e-books, books, tickets for movies and concerts, listen to their favorite radio station, create forums, etc. Douban is a friendly app that allows users to keep up with what their friends are doing and share their passion.

In terms of users, it is clear that Douban is less popular than WeChat and Weibo (for which users need to register to have access to it) attracting non-registered users. Even though it might seem redundant to you, if you’re looking for an app to promote your artsy goods, Douban may be the perfect platform. It’s easy and convenient enough so that anyone can use it, unlike other platforms

Why should you use Douban as part of your marketing strategies?

It’s important to take into account that Douban is not targetting all the Chinese population. As mentioned earlier, the demographic of users on this platform are mostly citizens from Tier 1 and 2 cities, which leaves out the rural areas in China. This means there are fewer potential customers who can access your products or services if you focus solely on marketing here.

On top of that, Douban is not considered as a purely marketing app, as it only has banner ads. However, it is an interesting alternative to other social media platforms, offering a low CPM of 15-20 RMB for advertisements, and allowing brands to have their own page called a “brand station”, on which they can post content about their story (useful for story-telling), logo, history, CEO, etc.

On the other hand, as you might probably think of it when reading the presentation paragraph, Douban’s success secret for marketers is the power of its word-of-mouth.

As depicted by this survey from Hootsuite, word-of-mouth is the main source of new brand discovery for Chinese consumers. In fact, Chinese consumers are extremely cautious when buying new products, which explains why they heavily rely on their relatives and friends’ opinions. The rising use of social media has contributed to this phenomenon, with a much larger base and much more opinions than before.

As this type of public platform relies heavily on reviews, ratings, and discussions for its success, brands can take advantage of it to change or improve opinions about their products with great effectiveness, as well as engage with their community, replying to questions, and even creating events reuniting people sharing the common interests in order to get their feedback.

What are Douban Features?

Douban’s Music section is probably its most popular feature, allowing the new artists to present and promote their songs to the audience and get their reviews. We can compare this functionality to MySpace. It is a good opportunity for users to discover new artists and support them.

Another core features of Douban are its group communities called “小组” on which people can share their experiences and join groups to talk about specific subjects with people sharing the same interests.

Douban’s movies section is similar to IMDB.com (which is blocked in China) allowing users to rate movies and give reviews. It is also extremely useful as people can directly book tickets on the app, find out movies that are at the theater, select the genre of movies they want to watch, etc.

On a movie page, people have access to the trailer (to see if it’s worth it), ratings from other users who’ve seen them first-hand as well as their comments.

This section is pretty similar to the movie section, allowing users to rate and review the series. There is a large variety of series, from classical Chinese series to the latest American series. There are also top rankings that allow users to click on it and have direct access to the top-rated series.

Douban’s books section is a place where people can review and discuss books, buy them directly from Chinese websites such as the e-commerce platform JD.com for example. This makes up one of its revenue sources, which is considerable and has become part of its core strategy. People can find old foreign books like “1984” or the “Little Prince”, but also some contemporary Chinese novels, fanfictions, etc.

Douban’s “City” section features an array of events, such as festivals and exhibitions, with a section for people who are interested in group activities as well. Thus, it allows users “living in the same city” to not only discuss online but also meet in real life.

Douban.FM is a music streaming service that allows you to listen to tracks based on your taste and preferences, much like Spotify or Youtube Music, but with more customization ability in terms of skipping or liking tracks, etc.

In order to attract and retain users, Douban created its section “Douban’s Goods”, offering the opportunity for users to purchase goods with the logo of Douban on it for example. Moreover, Douban recently launched its “new stuff” section (quite similar to Taobao), allowing brands to display their products, and allowing users to directly purchase on the app. Even though this feature is not as popular as e-commerce platforms, it is slowly taking part in Douban’s growing success.

How to use Douban for your marketing effort in China?

Douban is a Chinese social media site that is going to bridge the gap between e-commerce and marketing. They are one of few companies in China that have embraced the rise of online shopping with open arms, as their new Stuff sections reflect this change. This move also opened up possibilities for more sophisticated promotion campaigns targeted toward upscale urban consumers through communities and groups on Douban’s platform and for brands that are looking to promote their products through different channels.

For example, Lancôme took advantage of Douban to attract a wider audience and diversify its marketing channels. As seen in this picture, brands can advertise through banner ads, and open screen ads.

Case Study: One Plus Mobile Phone

One plus was able to generate online traffic with thousands of reactions following their posts on Douban, as well as to organize an event in real life and retain users. Thus, when used with both online and offline strategies, Douban can be an extremely useful tool for marketers.

Our agency is born out of our passion for the web, digital marketing, and business in China. Located in Shanghai, Gentlemen Marketing Agency is positioned and focused on the Chinese market and on social media.

With our experience in many different industries, we understand the issues and opportunities foreign brands have to face when entering the Chinese market. We can help you achieve your goal and get started on several platforms that will help you increase your Return on Investments. Using Douban can be an excellent way to help you promote your brand in China, and raise your brand awareness as well. Our experts can help you understand the right techniques on Douban, and help your register as well your official account. Do not hesitate to contact us if you need more information or if you have inquiries, and we will reply within 24-hours.