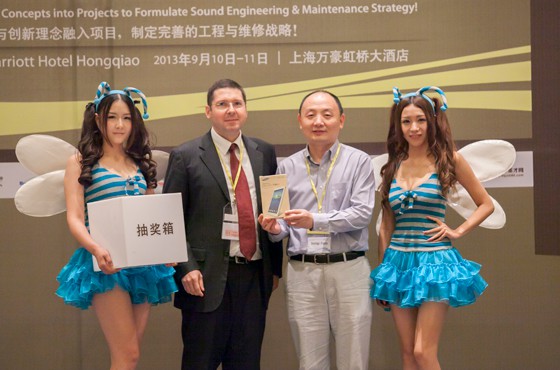 Today, we have the pleasure to receive some feedback from a company manager who spent several years in China. In this interview he will tell us how he became a company head in China as well as his insights about industrial marketing in this country

Could you please introduce yourself?

Bruno Lhopiteau, already 15 years working with industrial maintenance in China. I founded Siveco China in 2004. Before that, I was employed by a Swedish provider of business software for Chinese infrastructures and utilities, more particularly in the nuclear and hydropower market. Prior to coming to China, but that was really a long time ago, I first worked in Sweden then in Singapore. I am 41 year old, married to a Shanghainese I met in Sweden, we have two fast-growing daughters. I am the proud holder of a permanent resident card since 2006, but not yet a CPC member.

Could you introduce your company?

We are number one in the Chinese maintenance consulting market. Not only were we the first to offer such services in China, but since 2008 we are also the largest by revenue, headcount or number of customers. Our clients are usually large groups, such as Chinese property developer Greenland, mining group Fushun Mining, LNG producer Hanas New Energy, chemical producers such as Sichuan Chemical, multinationals such as papermaker International Paper, automotive suppliers Brose, Magneti Marelli, Sogefi, ZF, various divisions of GDF Suez, Saint Gobain, Alstom, all the hypermarkets of Carrefour China, etc. Presently we have around 850 client sites.

From the onset, in 2004, we came up with an approach adapted to the needs of what I call “maintenance with Chinese characteristics”, making use of innovative technological tools to ensure the implementation of best practices and methodologies, especially in terms of preventive maintenance. The few competitors we have, locals and foreigners, are still trying to replicate Western models that simply do not work in China. My view, my bet, is that those Western models will never work: China will invent its own model, with or without us, and will end up exporting them.

That is what we did. In 2008, we set up a R&D center in Shanghai, for the development of mobile apps for maintenance technicians and, more generally, IT tools for industrial risk management. We opened an office in Chengdu in 2011. We are growing on export markets, where we assist large Chinese engineering and construction companies, in Indonesia, Malaysia, Laos, Sudan, etc. This year we have signed deals with Korean construction groups that build gas turbine power plants in Algeria. We now export our Chinese know-how, which makes us very proud, not to mention my local teams enjoy traveling the world!

How do Chinese industrialists view maintenance?

In the context of China’s booming growth, maintenance was not taken into account. The goal was to build fast, not too expensive and not too bad. Maintenance, or rather repairs, would come later, usually free-of-charge, as construction companies and equipment suppliers were eager to win the next projects. Nowadays, the enormous size of the installed base, infrastructures, factories, buildings, but also their premature aging, their increasing technical complexity (think about the fast-speed train network), their impact on the public and the environment (with all the accidents making headlines), the dire lack of management and technical skills, all contribute to a growing awareness of maintenance by large Chinese industrial players. The central government is keenly aware of the problem, since the public sector dominates. How to go from initial awareness to actual implementation is not simple…! In most cases, we are still observe that maintenance is purely reactive and not really managed: breakdown occurs, followed by repair, too often in the form of a quick-fix.

Yes and no… Foreign companies, especially their western managers and engineers, are educated and experienced when it comes to maintenance. Back home, maintenance is usually taken into account at an earlier stage and benefits from existing standards and regulations, as well as from an entire ecosystem of specialized suppliers.

None of this exists in China, but new western investors too often choose to ignore it, as they focus on growth just like their Chinese counterparts. Maintenance is often delegated to the Chinese JV partner, to a local maintenance manager, or perhaps to his cousin or classmate who happens to run a technical service company… Problems appear later, sometimes disastrous with production stoppages, quality problems, major reinvestments… Large multinationals that have been in China for many years, with many sites and a more or less stable expat team, are doing better thanks to their in-depth knowledge of the local market.

The major challenge we face when working with multinationals remains the cultural difference between their western and Chinese teams: we spend enormous amounts of time teaching them how to work together. This problem obviously doesn’t exist with local enterprises, culturally homogenous… Moreover, their decision centers are located in China: decisions won’t be impacted by whatever crisis occurs in a foreign market…

Do you observe changes in the way Chinese managers look at maintenance?

As I said, we observe a growing awareness of maintenance at top level in Chinese groups. In most cases,  it is the top management that initiates a project, not a technical manager: it is not unusual we get a call from the assistant of the CEO of a large Chinese company, acting on the boss’ request.

This change is the direct consequence of the industrial development process I have tried to describe, but also the result of government campaigns, some dating back to the early 2000s, aimed at promoting the use of IT as a tool to introduce better management practices in the industry. Although this has too often resulted in computerization for the sake of computerization, the initial good idea remains! Our approach consists precisely in combining maintenance expertise and high technologies: the IT tool being designed to implement best practices in the daily work processes of our clients. Local teams often focus on the technological side of our offerings, as they do not always understand the great impact their maintenance practices have on the business.

You told me you were using Internet to capture sales leads. Could you explain how?

In the first few years, we kept very quiet for fear of having our good ideas stolen! Around 2007, we totally changed our communication strategy and became very active online. We launched an online newsletter “Maintenance in China” (8-10 pages every month for 4 years now), written many articles, case studies, new deals announcements, which are frequently republished by Chinese industrial media. All our real-life marketing activities, conferences, press articles etc. are immediately announced on our website. All this naturally contributes to a good ranking in web searches and helps our prospects to self-educate: sometimes they know everything about our company before the first appointment. We systematically repost this content on Weibo (results are hard to measure, in my view more of a gimmick) and on Linkedin (with good results in terms of reputation, we are relatively well-known by our Linkedin audience, mostly expats or Chinese managers in multinationals). Finally, we use Baidu in a controlled manner, with keywords that we try to optimize from time to time. I believe our content is very professional, but our usage of Internet tools remain amateurish, although we are certainly ahead of most industrial SMEs.

In practice, what results do you get per week?

Per week, on average 3-4 qualified leads come from Internet. Often our hotline would receive a call and the caller tells us he found us from a web search. More rarely, we receive emails, mostly from westerners or clients located outside of China.

What are the main differences between western and Chinese marketing practices for industrial enterprises?

I am not familiar with western markets and there must also be differences from one western country to another. I am more familiar with French industrial SMEs, which I find rather conservative in terms of Internet communication. They probably rely on their historical reputation and customer base. In their home market, large industrial clients are very open to work with SMEs, which is not at all the case in China: none of our Chinese client wants to work with a SME, they want to work with global market leaders! This is where the use of Internet, a clever positioning and a marketing approach adapted to the local market, play a key role… As I have explained, many prospects find us thanks to a web search and, more often than not, the need was raised by the CEO or VP of a large company, worried about the maintenance of his facilities.

Since it is the boss who initiated the project, a decision is likely to happen fast. I find such a scenario hard to imagine in Europe!

What top three advices would you give to other entrepreneurs in China?

I recently took part in a case study on this topic for the “European SME Center”, I will let you know when the document is online as it could interest your readers. There are many different types of entrepreneurs and enterprises, I am not sure I can give relevant advice to all… But for an entrepreneur or SME providing services to industrial clients, I would say first of all do not underestimate the capital needed to start in China (do not rely on minimum capital requirements for WFOE, which have been reduced a lot in the past few years; instead, make realistic estimates of cost and revenue for the first year, with revenue perhaps closer to zero…). I would also suggest them to target a niche market, to define a clear positioning and to communicate it actively to the market, especially on the Internet.

Finally, in my opinion, to build a sustainable business in China means to have a high proportion of Chinese clients.

Thank you, Bruno for your feedback and explanations!

To know more about industrial marketing :