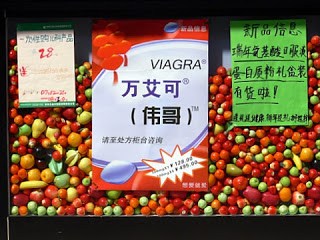 The Chinese market has a very strong segmentation with a lot of very small manufacturers. The 50 largest producers occupy only 1/3 of the market. Nowadays with the westernization of Chinese society, a sub-market is booming: sex enhancement supplements. In this market, the segmentation is even higher with a certain lack of transparency, especially online!

This market, of course, takes advantage of the fundamental complexity and fear of man.

For Chinese traditional medicine, Ginger is aimed at people who do not have erectile problems but who want to be more efficient in practice and in the long term. Ginger may stimulate sexual desire or libido.

In traditional Chinese medicine, the goji berry is used to improve male fertility and sexual performance. Modern research undertaken in Beijing has shown that the berries contain a complex of polysaccharides which may offer a protective action to sperm cells. The aphrodisiacal powers of goji berries may also owe something to the fact that the berries can aid the body’s adrenal system which controls most of the working of the sex hormones.

Ginkgo is an herb that is used in Chinese medicine that’s thought to improve blood flow and well known for reducing stress.

The Yarsagumba is regarded in China as the most powerful aphrodisiac in the world. Yarsagumba is only cultivated in Tibet and was during the past reserved for the Dalai lama and some priests.

Several studies in China on more than 1000 men and women showed that Yarsagumba at a rate of 3 g per day was effective in stimulating sexual function deficiency.

China has always been a country relatively not so open-minded regarding the sex issue. So Chinese people have been quite eager to discover a western alternative to the traditional Chinese medicine when it comes to dealing with sexual performance dysfunction.  First China became a huge market for some pills like Viagra or Cialis which are allowed by the SFDA (State Food and Drug Administration, P.R. China).

The problem is that Viagra and Cialis were copied and that the copies were even more dangerous for the health than originals.

So many fake pills are sold in China but not allowed by SFDA and people in China were well informed of the risks of such pills so they wanted to find an alternative to traditional Chinese medicine and pills: dietary supplements.

Many brands are distributed in China. The sex enhancement dietary supplements market is segmented.

Vietnam, Thailand and China play a major role in the traffic of rhino horn, according to a 2012 report by the WWF. Rhino horn is considered as an aphrodisiac in Asia although it is not scientifically proven.

The aphrodisiacs’ market attracts a lot of scammers and 90% of the products on sale are dangerous.

Since 2004, FDA (Food Drug Administration) in the USA has identified several products sold in China online as so-called “dietary supplements” for treating erectile dysfunction and enhancing sexual performance. These products have contained potentially harmful, undeclared ingredients. Included among them are:

The sex enhancer has always been an important market in China. Nowadays dietary supplements are seen by many as a good alternative to traditional Chinese medicine and to pharmaceutical pills. But this huge market is jeopardized by a lack of credibility. The market is highly segmented and presents a lack of transparency. The sex enhancer supplements market compared with the dietary supplements market is like the porn industry compared to classic cinema. So many investments in marketing will be needed to foster a relationship of confidence between reliable brands and their customers. Chinese in 2013 are very preoccupied with the issue of food safety so some brands will have a great interest in investing in e-reputation on Chinese social media.