.Durex is a foreign brand that really succeeded to enter the Chinese market. The brand made a sex wellbeing survey on Chinese people that was launched around Valentine’s Day. The result shows Chinese still put love before sex. 72% male and 75% think females’ emotional demand is more than that from males, such as the feeling of being loved, respected, and intimate. 85% of the females believe sex enhances the relationship of couples. The survey also covers sex frequency, satisfaction, education with both surprise and warning inside.

The survey also discovers the great geographical difference in sex frequency. Professor, Liu, associate research fellow from China Population and Development Research Center, explains that the local culture can have a great influence on this index. The result shows, 84% of Guangdong people have sex at least twice a week. Tianjin ranks last in this with 48%.

Besides the place, another factor that influences sex frequency is age. People who have the highest percentage of sex over once a week are those between 25-34, following are those between 18-24. It also reflects the fact that the prime time for people to have sex is between 18-34 years old.

Geographically speaking, Guangdong people are the happiest people, 89% of them are satisfied with sex, on the other side, Fujian people are the most disappointed ones, only 68% of them think they are satisfied. In terms of age, like sex frequency, people between 25-34 rank No.1 on this with 85%, people from 18 to 24 follow, at 83%.

The young people from 18 to 24 are the most open group of people to this, at 53%. 41% of people ranging from 25 to 34 are ok with that. In East China, people are more tolerant of sex at first meetings than others. Especially people from Jiangsu, with 79% and the least acceptance from Hunan with 24%.

In 2006, 12% of 16-18 years old people experienced their first time. While in 2011, the same data has increased to 22%. Although it is still lower than the world average of 16%, it is still a potential danger because of the lack of sex education. 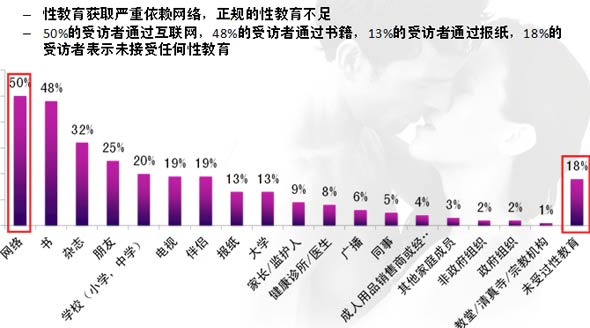 Professor Liu also explains that the source of information is too concentrated on the Internet: 50% of the respondents get their sex education via the Internet which is a mingling of good and bad. One reason for this is the lack of formal education: 48% of respondents get information from books, 13% from newspapers and 18% have never been educated at all.