The road to online property lodging in China has been a rocky one with levels of awareness & interest in the concept slower to take off than in the rest of the world. A whole host of Chinese sites have tried and failed to duplicate the success of Airbnb in Mainland China. With it’s closed, online ecosystem that is more akin to an ‘intranet’ on a vast scale, it is domestic platforms which dominate and cater for China’s unique user base.

Here I will explore the business model of China’s different answer to Airbnb:

One local company have stood out from the crowd,  Tujia.com (途家）, China’s largest vacation rental website was founded in 2011. In less than five years it has grown from an unknown to a digital giant– one of an elite group of tech start-ups whose market valuation surpasses the $1 billion mark.

Chinese home sharing is a very different proposition. Melissa Yang, cofounder and chief technology officer of Tujia.com, said her company is based on a model very different from Airbnb’s. This is because of the stark contrast in cultural and consumption behaviours between travellers in China and the United States. At the risk of regurgitating stereotypes Chinese tourists typically don’t trust industry intermediaries, often travel in larger groups, require Mandarin language assistance & have a propensity towards Chinese style food.

That’s why her company, Tujia, took to managing all the properties listed on its website in order to guarantee a service quality that caters for the unique Chinese visitor. In effect they are more akin to a serviced apartment provider.. and an intelligent one too.

“We managed all the properties ourselves from the beginning,” she said, speaking on the sidelines of the “Most Powerful Women International Summit” hosted by Fortune magazine in Hong Kong.

“There are huge differences between U.S. and Chinese travelers,” she explained. “Chinese travellers are increasingly discerning when it comes to travel agencies and their services.” Tujia fit in by catering for Chinese group travel with multiple apartments offered in complexes. They also tap into the emerging trend of independent travellers, often of the younger generation.

This is all set amidst the growth of Chinese international travel across the globe. Customers are demanding new and different experiences as the country opens-up culturally like never before in its tumultuous history. Last August, Tujia raised $300 million in its latest funding round, led by Singapore’s top property developer and early investor in China, Capitaland, and its fully owned serviced apartment unit, Ascott Limited. Together the pair invested $50 million. Ctrip, Tujia’s single largest investor since its founding, and newcomer All-Stars Investment have also joined the funding.

The heart of home sharing services is trust, this is harder to build in China’s mad, headlong rush into the jungle of capitalism. This partly explains the concepts gradual rise rather than the meteoric rise of Airbnb, it had to be tailored and adapted for the Chinese market.

Education, reputation and branding for Tujia.com are everything as they persuade home owners to hand over the keys to luxury villas & apartments. Tujia typically focuses more on the high-end market as international Chinese travellers are the richest segment of the population. The association and links with Ctrip, China’s largest travel provider helped cement their reputation. The firm also engaged in high profile marketing activites on all major social media platforms to share information and examples of how the concept benefited the Chinese traveller. 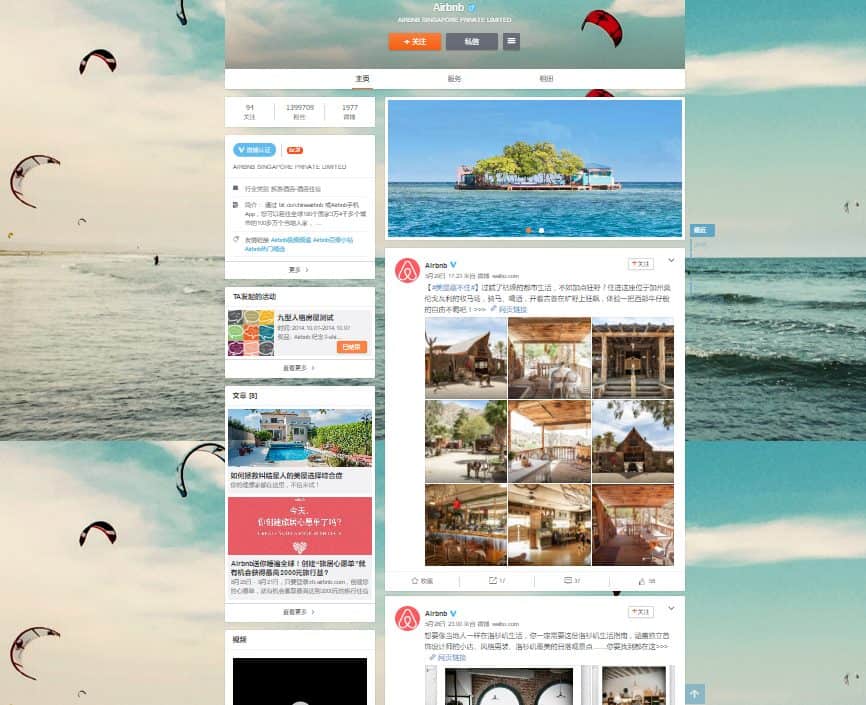 By managing the properties themselves they can ensure quality and cater for the Chinese tourists specific needs, this sets them apart from other copycats which are less focused on the end consumer. The first 10 000 properties listed were directly managed with Chinese customer services provided for the home stay.

For large scale Chinese start-ups building & managing reputation is everything. Users are incredibly active on social media and forums, they will post reviews on mass, such a large user base of over 850 million netziens creates more potential for virality of both positive and negative content. Tujia managed and created a positive e-reputation through managing the properties to ensure good experiences and then up promoting positive posts to ensure they were highly visible.

After this Tujia opened up self listings which were unmanaged (although this is not the bulk of their business) as well as serviced apartment options. In this fast paced digital era the website now boasts over 400 000 property listings. The majority of which are fully managed, partly managed or serviced. In march 2016 monthly bookings hit a record high.

Tujia’s workforce of more than 3,000 takes care of housekeeping at the properties managed by the company. The company holds classes to train property owners to self manage, and conducts inspections to make sure that online pictures are an accurate representation of reality.

Property owners on Tujia can become ‘managers’ and part of the companies team tasked to audit and verify the quality of listed properties. This makes their more regulated approach feasible, they in-list and incentivize property owners themselves.

All properties listed on its website, about 420,000 units, are classified according to a star system, with every star assigned and verified.  The result is a gratifying response; customer ratings of their experiences with Tujia average 4.6 out of a total score of five. Properties that lag behind risk being evicted from the website, their USP is guaranteeing quality, an area Airbnb have significantly fallen behind on.

Tujia are another great example of the digital innovation we are witnessing in China with platforms no longer merely copycats but tailored versions for the very different mainland market. It emphasizes the importance of Chinese competitors, foreign platforms such as Airbnb are restricted from China but still influence the development of continual web innovation that can no longer be simply labelled as ‘copycat culture’. Idea’s do happen in multiple places in time, many of us are just more predisposed towards western tech developments than Chinese ones.

We are a purely digital marketing agency with our finger on the pulse of the Chinese market. We are international team with a wealth of experience to develop your interests in China. For more information don’t hesitate to get in touch.