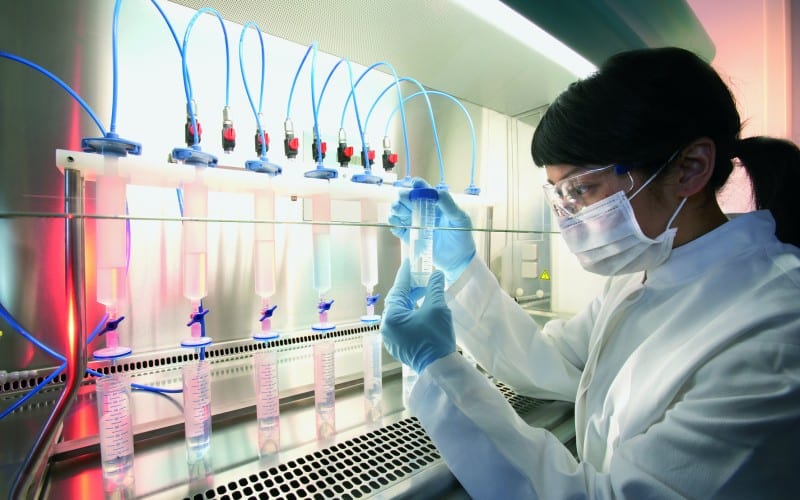 There has been a step-change in the quantity and quality of companies over the past few years, and unsurprisingly, the amount of capital funding in these investments has also risen.

Today, China represents the second-largest health care market globally. In 2018, the pharmaceutical market in China was worth $132 billion, according to GlobalData. In 2022, it could rocket by nearly two-thirds, to $209 billion.

For example, in October, Amgen announced a $2.7 billion stake in Beijing-based BeiGene (BGNE). Under the terms of the deal, BeiGene will sell three of Amgen’s drugs in China. More important, BeiGene will help Amgen develop 20 new cancer drugs.

Venture capital investment into most sectors in China has generally plunged throughout the Covid-19 pandemic but biotechnology has been a noticeable exception. China’s biotech industry has continued to attract investors, not only because of its importance in dealing with the pandemic but also as a result of increased maturity and a growing list of government incentives.

There were 95 biotech-related deals to June of this year, drawing $12 billion in total investment, an unprecedented volume of deals. It seems that Covid-19 has drawn significant attention to the health care sector.

The first two fundraising deals this year were from Everest Medicines Ltd. and Mabwell Bioscience Co. Ltd., which raised $ 310 million in June and $ 279 million in April, respectively. Both companies have oncology and immunology products in their pipelines.

Major biotech IPOs in Shanghai or Hong Kong this year have been carried out by companies engaged in the development or discovery of first-rate or best-in-class products. For example:

Reasons for the increase in investments in China

There are 3 major reasons for the increase in investment:

One of the areas that are gaining more interest is the research and development of innovative drugs for the treatment of cancer and precision drugs.

Akeso Inc. has raised its second-largest IPO in Hong Kong this year. Akeso Inc, which specializes in new investigative drugs to treat major diseases such as cancer and autoimmune diseases, raised $ 335 million in April. Share prices increased from HK $ 26.20 (US$ 3.38) on April 29 to HK $ 30.40 on July 30.

Why should biotech companies look to China for investment?

Changes in the law and significant economic success in the country in recent years means that new opportunities are opening up in China.

China has a huge population and a correspondingly large patient group. Domestic science is quite advanced in some areas, however, drug development in China is lagging behind globally. There is a strong need for Chinese companies and investors to obtain innovative drugs, and foreign biotech companies provide a good source.

In addition, the Chinese Government has introduced changes in regulations to make it easier for local companies to develop new products, but also for banks and VCs to seek out promising foreign investments.

Biotech products can enter the Chinese market much faster either by direct entry or via out-licensing to a Chinese partner, which means faster returns for the investors if the drug is successful.

How can foreign biotech investors succeed in China?

Cultural and language barriers can be a difficult bridge to cross and the experts agree that working through a third-party consultant can make life a lot easier for Westerners wanting to do business with Chinese firms, or in China.

Thanks to all of our work and our great team of experts, GMA team is able to provide you the best advice for your implementation in China. Many biotech companies like Arkopharma Laboratories already chose us to increase their visibility and brand awareness in China.

Go digital is the key to succeed in China

With over 900 million Chinese connected online, Chinese platforms dominate and must be utilized by save healthcare companies to grow their visibility and reputation as well as their product range and associated health benefits. Digital marketing is also the most cost-effective method offering substantial Return on Investment.

First of all, you have to create a Chinese Website (In Simplified Chinese). Your website also needs to be hosted in China to be visible on Baidu, the most used Chinese search engine. Before any purchase and consulting demand, Chinese patients will search on Baidu information about your company. In a sector like healthcare, transparency is the most important criteria for consumers.

Pictures, content, videos are vital to give a good impression in Healthcare in China. Chinese consumers like quality content, read explanations, and doctors’ testimonies when it matters to health.

Baidu SEO optimization is essential to rank on the first page of Baidu keyword search.

Many locals, Chinese healthcare companies have cheated Chinese consumers, often with disastrous effects.  There was a huge case in China where an individual was searching for cancer-related care yet found inaccurate and wrong procedure information advertised by a Chinese company on Baidu. After this Baidu has really clamped down on healthcare product quality offered via the platform, particularly in the paid results. That explains why Chinese consumers are very careful.

It is more important than ever therefore to establish a strong e-reputation and reinforce the trust. In the health care sector, this is a real problem and quality must be improved in terms of product offering and instilling that reputation in the minds of consumers. There was a strong backlash against local companies (after the aforementioned incident on Baidu) with international healthcare now leading the way for those able to afford it.

Working on forum community management is a great way to boost your reputation and also rank highly in Baidu’s search results as these forums are highly ranked themselves, related content will thus appear on relevant keyword searches.

Use social media to gain visibility in the Chinese market

The most popular platforms in which number the large majority of Chinese users are Wechat and Weibo.

In China, social media have to be an important part of your marketing strategy. Social media allow you to gain visibility.

Contact GMA to know more about how to enter the China biotech industry!