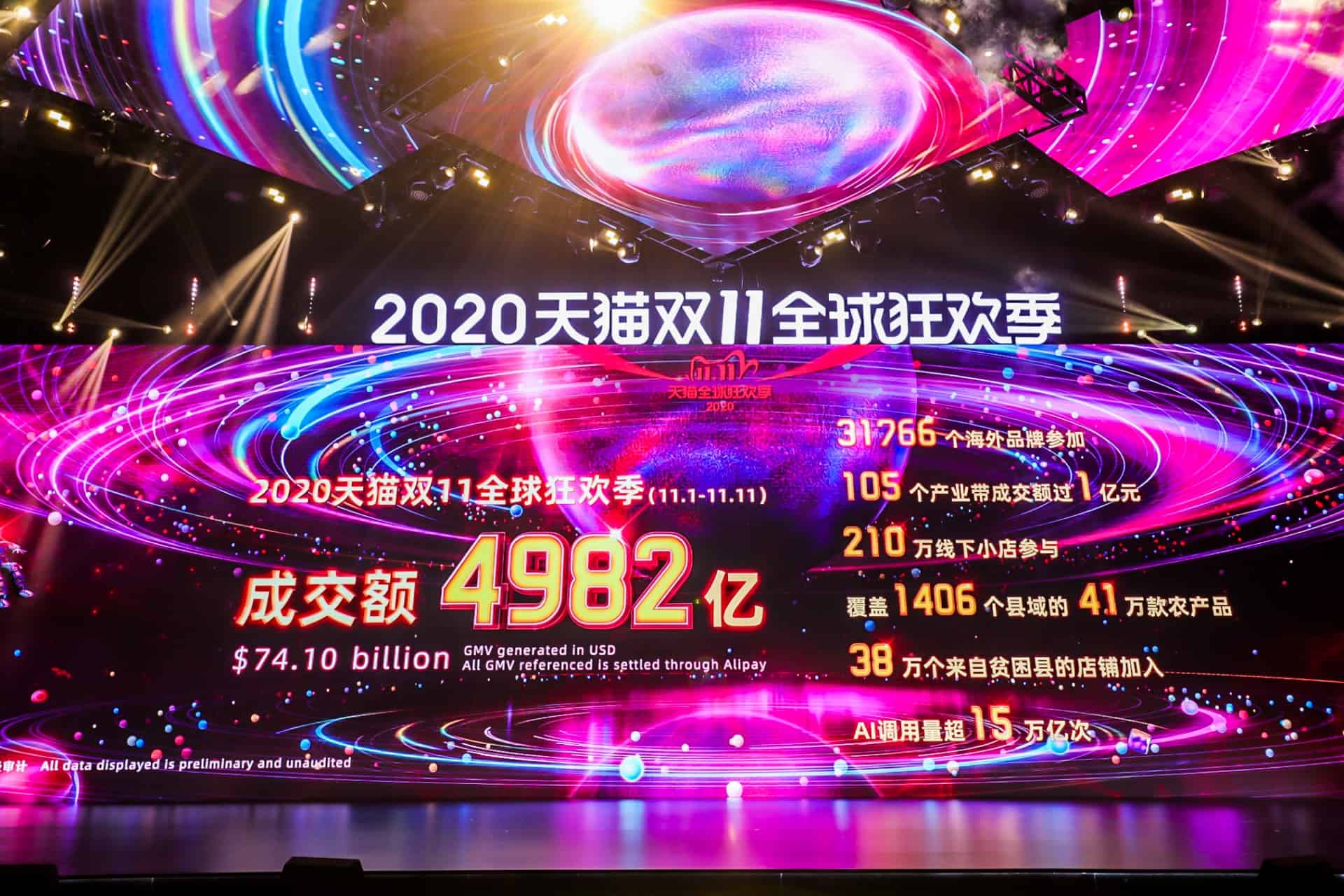 At 00:00 of the 12 November, Alibaba Group announced the 2020 11.11 Global Shopping Festival GMV was up to RMB498.2 billion ($74.1 billion) during the 11-day campaign from November 1 to 11.
The GMV during Double 11 this year increased by 103.2 billion over the same period last year, with a growth rate of 26% – the highest growth rate in the past three years. This year’s shopping festival also had a new change-the shopping period is longer. This Double 11 started on the 1 November while in the past years, it was the real Double 11 shopping festival which started on the 11 November.
Just after 0:00 on November 11, Alibaba data showed that this year’s order peak reached 583,000 transactions per second. In terms of logistics, at 24:00 on November 11, the total number of real-time logistics orders for 2020 Tmall Double 11 was up to 2.321 billion.

Live-streaming channels skyrocketed by 220% during the festival

During the 2020 global shopping festival, more than 300 celebrities and 400 CEOs entered the live-streaming room. In addition, the two Chinese leading KOLs-Wei Ya and Li Jiaqi ranked first and second in terms of real-time sales.

This year’s shopping festival, Wei Ya has successfully cooperated with Taylor Swift on her live-streaming which has helped the famous KOL gain a lot of traffic.

Tmall announced that this year’s Tmall Double 11 attracted more than 800 million consumers, 250,000 brands, and 5 million merchants to participate, making it the most extensive and highly engaged event since 2009.

The top cities that contributed the most to the Double 11

According to data from Tmall, as of 23:59:59 of the 11 November, the top 10 provinces with the highest purchase amounts in China are Guangdong, Zhejiang, Jiangsu, Shanghai, Shandong, Beijing, Henan, Sichuan, Fujian, Hubei, and the top cities that contributed the most to the double 11 are Shanghai, Beijing, Hangzhou, Shenzhen, Guangzhou, Chengdu, Chongqing, Suzhou, Nanjing, and Wuhan.

According to Alibaba’s data, from the opening of Tmall Double 11 in 2020 (November 1st) to the present, the top growth in tourism (product) destinations are generated in Shanghai, Zhejiang, Beijing.

Foreign capitals bet on the Chinese market with the biggest discount

The year 2020 is just a difficult year for the cosmetic industry, as it is for many other industries. Since the COVID-19 is almost under control in China, the country’s economy starts to recover. Many cosmetic brands have experienced the recovery of the Chinese market and made efforts to capture this saving straw.

Undoubtedly, judging from the current data, foreign-invested cosmetics products were the biggest winner of this Double Eleven. From 0:00 on November 1st to 1:00 on 11th, the real-time transaction list of Tmall beauty brands was released. The top ten are Estée Lauder, Lancôme, L’Oréal, Whoo, Olay, SK-II, Shiseido, Sulwhasoo, La Mer, and Kiehl’s. Local brands were not on the list yet.

The potential of China’s hyper-scale market and the development of the digital economy have made Double 11 get viral. Behind the ever-increasing turnover figures, we can see the potential of the market, the sound momentum of economic development, and the echo of early exploration.

We have seen the transformation of payment mode, the rise of the live-streaming ecosystem, IoT devices and robots used in logistics scenarios, and a more flexible supply chain… From this year’s shopping festival, maybe What we see is the beginning of the next twelve years.

GMA, an expert in the Chinese market and digital marketing.

Read more about eCommerce in China: