A New Target Market for Short-Video Platforms: the Silver Generation in China 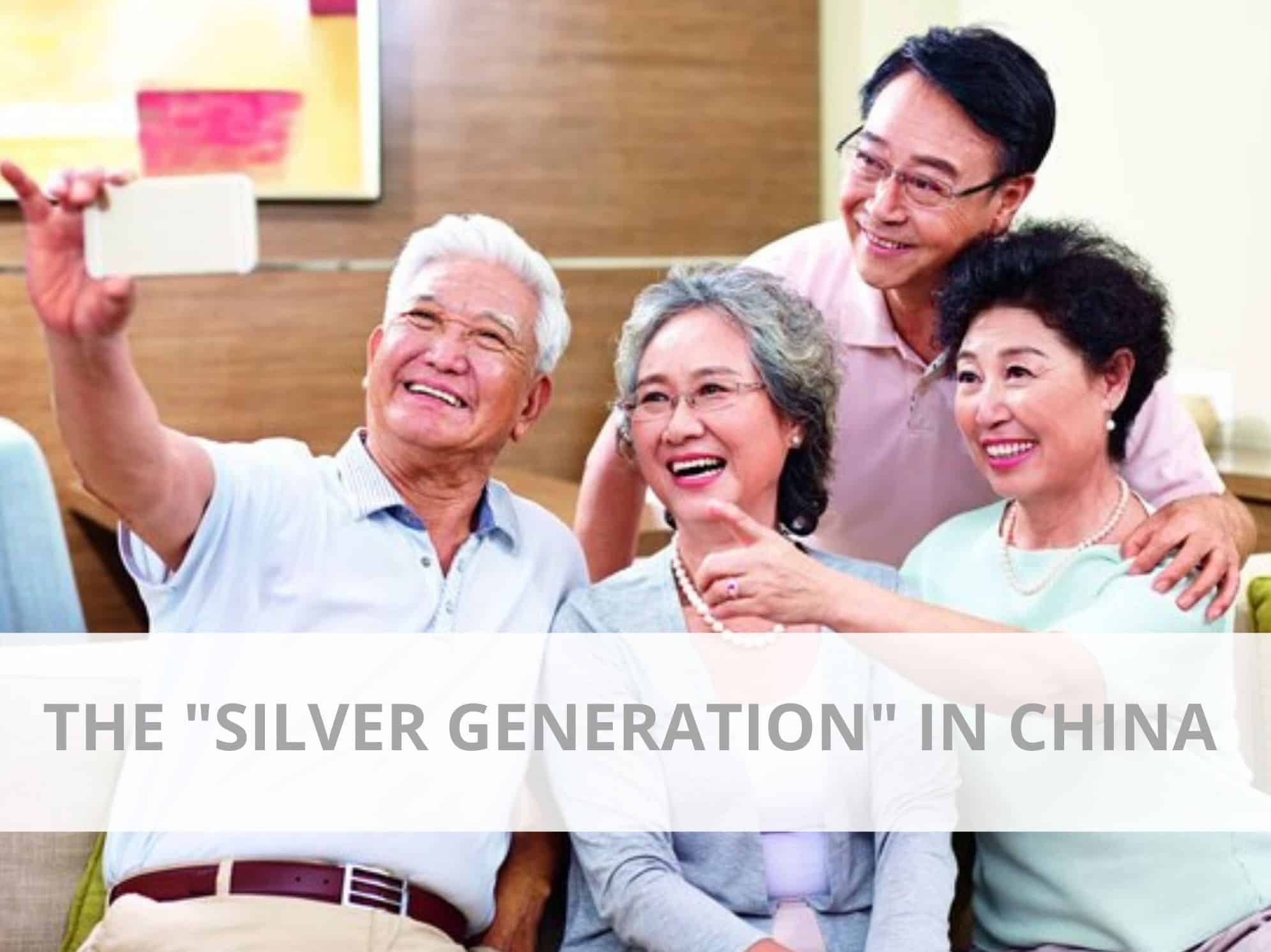 In recent years, shirt-video platforms stormed the market all around the world, but in China, the interest in this type of entertainment is far more advanced than elsewhere. Platforms like Douyin and Kuaishou are becoming increasingly popular among young people in China.

But China is probably the most digitally-advanced nation in the world, with even very old people fluently using smartphones not only for calls but also for shopping or entertainment. Thanks to the Covid-19 lockdowns, many older people in China were forced to get used to the digital world and now they happily visit all the social media platforms and eCommerce sites, and short-video platforms also caught their attention.

In this blog post, we will explore market insights regarding the senior generation, as well as the opportunities and challenges of targeting this demographic, and strategies for effectively reaching and engaging with older users.

Today’s generation of Chinese consumers who are 60 years old and older is more comfortable with modern technology and open to embracing new experiences, products, and luxury goods.

Trends also indicate that this demographic is experiencing a growth in purchasing power while enjoying more free time. Today’s most frequent users of China’s popular social media app WeChat is also dominated by this age group, who use 80% of their cell phone data on the app, compared to just 6.8% by Millennials.

Despite this burgeoning consumer segment, only 8% of China’s silver generation feels relevantly targeted by marketing and advertising campaigns. There’s a huge opportunity for brands and industries like travel and insurance, simply due to the sheer volume of potential customers.

A large number of middle-aged and silver hair generation of influencers with the label of “fashion and talent” are occupying short video platforms by creating a huge contrast with age and targeting China’s ageing population of tech-savvy consumers.

In fact, meanwhile on the one hand there are the Millennials and Generation Z who adore these short video platforms and use them to dance, jump, lip-sync, and even produce comedy skits. On the other hand, there is the silver generation that is emerging on those platforms, looking for content aimed at the Chinese senior population.

These apps were mostly playgrounds for people born in the 1990s and later. However, the situation is changing and brands should adapt their marketing strategies to this new trend to reach these consumers.

‘Silver-haired group’ of influencers is constantly growing, and a group of middle-aged and senior influencers with tens of millions of fans have grown up in Douyin.

Douyin 抖 音, the Chinese counterpart of Tik Tok, is a short video app that has become very popular in China. It is used by users to scroll through fun mini-videos. Its linear and direct communication, in fact, captures users and holds them in front of the screen longer than other platforms.

It has often proved to be a strategic ally for international brands present in China because thanks to its original content it contributes to increasing brand awareness of brands and gaining consumer confidence.

Before answering this question, let’s see together some examples of silver generation KOLs (Key Opinion Leaders) on Douyin.

KOLs have the ability to influence the masses in their decisions, thus being able to lead to the purchase of a particular product in place of another. They are figures that have become fundamental for the various companies for the launch of products, brands, or services offered.

Their use is particularly important as influencer marketing in China, where this sort of enormous trust placed in individuals is most present, therefore able to suddenly increase the sales of certain goods (even luxury) in a very short time.

Regarding the “Silver Generation” KOLs below you will find two examples of influencers on Douyin.

The Chinese elderly watch short videos just as much as the younger population and as the silver economy is growing, elderly people start to shop online. As their spending power is bigger than people from other age groups, companies should start targeting elderly consumers also on short-video platforms.

How to market your brand to China’s elderly population?

The Silver generation is a new opportunity for brands, but the purchasing power of Chinese seniors remains largely under-exploited by companies.

Wang Jiyong, vice-chairman of the Chinese Senior Industry Association (CSIA) said that “the senior market is worth more than 170 billion renminbi (around 28 billion dollars in 2015), but the products that are addressing this market today are only worth 120 billion”, which represented, in 2015, an untapped opportunity of around 8 billion dollars. Today the situation is no different.

Therefore this market could be a huge opportunity for brands due to the few presences of market competitors.

Volkswagen is one of the few Western brands that were able to efficiently target seniors with a commercial for its Beetle, showing elderlies imitating teenagers.

Chinese seniors market is the most profitable and fastest-growing segment in China and should be a core focus for many brands in the market. Marketers should not hesitate to use the Internet and social networks to engage with the older generations, since these days, they are more and more connected.

Chinese senior citizens’ consumption is distinctly different from the consumption of the younger generation. Most of the senior population in China hold the traditional opinion that it is important not to spend frivolously. They are more careful about their purchasing decisions. Thus, marketing to the silver-haired generation in China is different from marketing to the younger generation.

With a rising disposable income and an improved economy, the spending pattern of the elderly generation changed from traditional frugality to enjoyment. China’s senior population is more likely to spend money on these four areas:

Apart from dedicated short-video platforms like Douyin or Kuaishou, the Chinese silver generation also uses other social media, mainly WeChat. What is more, you can even create similar content, as WeChat recently introduced a new short-video sub-platform, WeChat Channels, which is pretty similar to Douyin.

WeChat, in Chinese Weixin, is one of the big players in the ecosystem of Chinese social networks. This year, it was confirmed as the most used messaging app in China. This is thanks to the number of monthly active users of 1.3 billion and the presence of 1.5 million brands.

Its users spend 30% of their time on the Internet, and it is not difficult to imagine why. Born as a simple app to chat with your acquaintances, it has long integrated typical functions of social networks and e-commerce.

You can also market your brand on Weibo, the biggest micro-blogging site in China, often compared to Twitter. There you have a better opportunity to reach a new audience and collaborate with elderly influencers, as it’s more of an open network, as opposed to WeChats’ closed ecosystem.

As short videos are becoming popular with the elderly, companies should focus their marketing strategies on these platforms. The best platforms for the silver-haired generation are Douyin and iQiyi. Since we’ve already talked about Douyin, let’s focus on iQiyi.

The increasing engagement of the Chinese elderly online, as well as their openness to using new media technology, arose the online video platform iQiyi’s interest to adequately target seniors consumers and capitalize on China’s short video boom through the launch of its short video app Jinshi (锦视).

Jinshi’s app focuses on topics of interest for the older generation such as politics, health, and the military. The main features of the app are similar to Douyin, users can like, share and comment on videos. Additionally to Douyin, Jinshi provides extra features such as easy swiping, a cleaner user interface, the possibility to feature horizontal videos, and the switch between video and audio streams, making the app more enjoyable to use for seniors.

Sell your products on Taobao and Tmall

Taobao and Tmall are two online marketplaces that belong to the Alibaba Group. They are the world’s biggest e-commerce websites.

Taobao released its customized “Taobao for Elders” app to specifically target senior consumers. The app provides a simpler design with a larger text display and a selection of products that cater to mature users, thus facilitating their online shopping experience.

The senior-friendly version of the popular e-commerce site aims to make it easier for those over-60s to pay for products online, offering a peer-to-peer chat function and a “pay for me” link that customers can send to family and friends.

We can help you target Chinese middle-aged and elderly consumers

Do you want to know more about How to market your brand to the silver generation in China? Contact GMA a digital marketing agency, specializing in the Chinese market.

We offer digital marketing and e-commerce solutions to brands from different industries and sectors and we adapt our offer to your needs and budget. Our team of Chinese and foreign experts has the experience and know-how needed to succeed in the Chinese market.

Don’t hesitate to leave us a comment or contact us to discuss your options in China. We offer a free consultation with one of our experts so that we get to know you and your brand better.